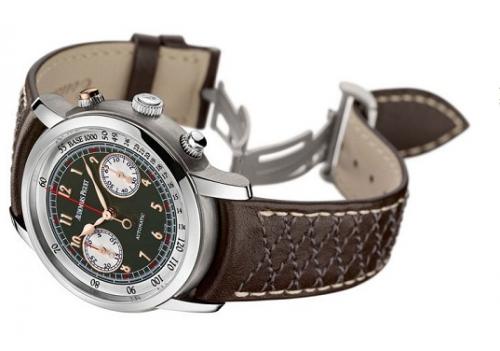 The piece features on the anthracite dial nothing is outsized, the applied Arabic numerals are understated, the counters are silver-toned and perfectly positioned.  On the titanium case-side the start/stop pusher for the chronograph appears in pink gold.  The Gstaad Classic 2011  logo appears on the sapphire caseback.

“THE PERFECT BALANCE OF FORCE” 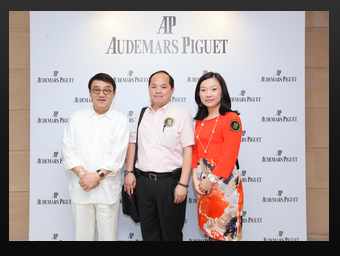 This summer, three new timepieces are joining the prestigious lineage of Royal Oak Offshore chronographs. Case size, design elements and the choice of materials represent a number of subtle touches that are forging a new path on which control meets strength. This new collection comes in a larger case – 44mm and in each of the three versions, the case is composed of two materials. Ceramics is associated with steel for the first, with forged carbon in the second, and with pink gold for the third. Forged carbon is a material borrowed from the field of aeronautics and which the Manufacture Audemars Piguet was the first to introduce into the world of fine watchmaking. The choice of ceramics for the bezel and pushpiece-guards – the part most exposed to shocks and thus to scratches is due to its extreme resistance and hardness.

Mr. David von Gunten, Audemars Piguet CEO of Hong Kong and China commented, “We are excited to unveil the very much awaited new Royal Oak Offshore collection to our collectors this evening. Once again, this new collection embodies the identity of the brand - combining audacity and performance, with the enhanced features such as a larger case and ceramics on the bezel and pushpiece-guards.”

Audemars Piguet collectors and socialites in Hong Kong had a preview of this new collection when models sport the new Royal Oak Offshore chronograph timepieces in Escada Sport and D’URBAN. Guests were treated to the perfect summer party with refreshing canapés served alongside champagne and freshly-made mojito cocktails as they partied to the light-beat music spun by the DJ.