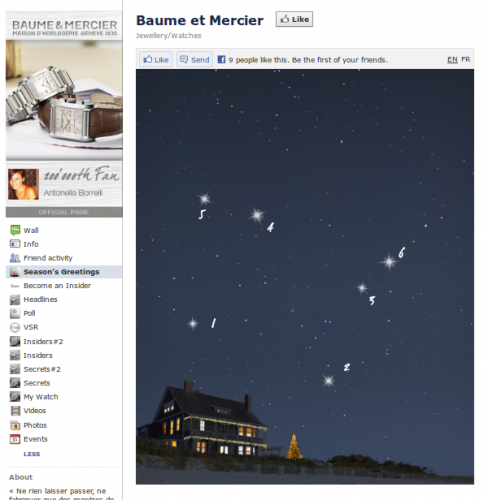 Baume & Mercier launched on December 1st a Facebook campaign to celebrated and share the countdown to the holiday season with its more than 200,000 fans around the world.

In the skies of the Hamptons featured on Baume & Mercier Facebook page, twenty-four stars will appear, one per day, until Christmas Eve. Each new day will bring new surprises to the luxury brand fans around the world with different stories, gifts, insights into timepieces, details about the heritage, savoir-faire, and collections of the Maison d’Horlogerie.

Alain Zimmerman, Baume & Mercier CEO, says that their goal is to further strengthen the relationship with their fans, and that this operation is also a great way to thank everyone for the continuing commitment to Baume & Mercier and to celebrate the holiday season. He also added that this campaign will be their chance to attract new fans who want to know more about the company.

With over 200,000 fans around the world, Baume & Mercier will be getting closer and more personal with their fans sharing the story of the brand, each detail, a start in the Hamptons sky lighting their way into the Christmas and new Year’s celebrations.
CHECK OUT Baume & Mercier's Watches at Interwatches!!Other posts about Baume & Mercier:
Baume & Mercier: the Hapmton CollectionBaume et Mercier selected watch for the GPHP
Baume & Mercier and American actress Gwyneth PaltrowBaume & Mercier aligns with Emmanuelle ChriquiBaume & Mercier, legendary femininity