The New Sotirio 2009 collection comes in three versions: an annual calendar, a perpetual calendar and a Tourbillon. In all of them, tradition and modern design, get to be the unified elements for an elegant look. The new Bulgari Sotirio watches are new versions of formal watches, in this collection, particularly without the double Bulgari logo. They emerge like unique pieces featuring manufacture movements, dials finished with exclusive treatments and a distinctive design of their cases. On its 125th anniversary, Bulgari dedicated this collection to Bulgariâ€™s founder, a multicultural pioneer businessman called Sotirio Bulgari.

One of these three special models is the Sotirio Bulgari Tourbillon QuantiÃ¨me PerpÃ©tuel. This Bulagari model merges the functions of an automatic Tourbillon function with a perpetual calendar and an innovative display that features double coaxial retrograde hands. It also features a BVL 465 Caliber movement. This movement can be appreciated through its transparent case-back. This sophisticated Sotirio Bulgari Tourbillon QuantiÃ¨me PerpÃ©tuel watch is offered in a limited edition of 30 pieces. 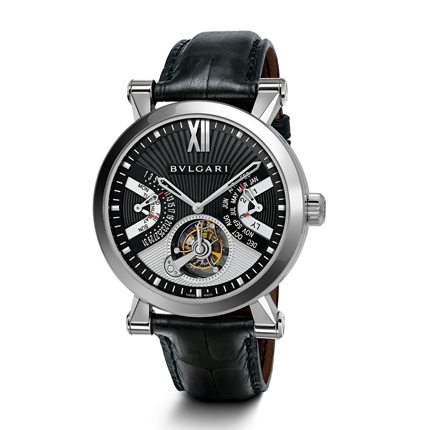 Another watch coming from this new Bulgari collection is the Sotirio Bulgari QuantiÃ¨me Annuel model. This wristwatch is equipped with the Bulgari 360 Caliber movement and enriched with by an annual calendar function with 225Â° retrograde date. It is available in a limited edition of 250 pieces for the 18Kt pink gold case version or 125 limited pieces for the version in 18Kt white gold, both with elegant crocodile leather straps.

Finally, the last of the three new models is the Sotirio Bulgari Date Retrograde, which 150Â° retrograde module, has been developed and produced by Bulgari. Made for commemorate the Bulgariâ€™s 125th Anniversary, this special tiempiece carries the Sotirio Bulagariâ€™s signature on its flip-over back case studied to reveal the movement. This model is offered in three limited editions of 125 pieces each one: in 18k pink gold, yellow gold and white gold, all equipped with the Bulgari 250 Caliber. 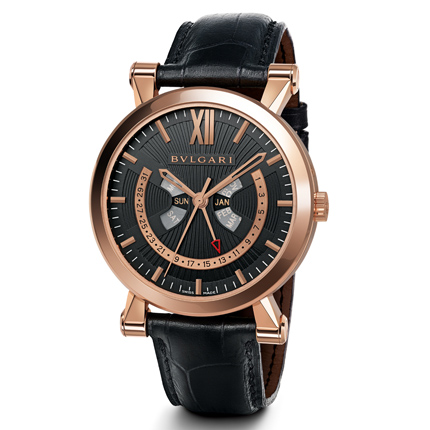 The new 2009 Bulgari collection resumes the brand's philosophy: exquisite craftsmanship, original design details and technical excellence. This year the Bulgari-Bulgari collection, the icon of the Bulgari watch line, was updated with a new ladies model: the Bulgari-Bulgari Moon Phase. This watch has a unique rotating indicator that depicts the phases of the moon. This complication continuously tracks the movement of the moon and also appears against a background of shimmering mother of pearl.

In this exclusive version, the 38 mm case has the characteristically linear and contemporary design of the Bulgari-Bulgari collection. The white mother-of-pearl dial is decorated with diamond pave and hand-applied markers. This Bulgari timepiece is water resistant up to a depth of 30 meters and it features an automatic B77 Calibre mechanical movement with a 42-hour power reserve. It also marks the phases of the moon and is decorated by Cote de Geneve and Perlage treatments. A white alligator strap with folding steel buckle completes the ultra-feminine appeal of the watch. 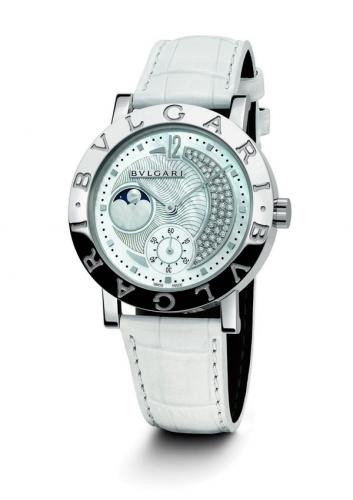 The Bulgari-Bulgari line, characterized by the famous double signature on bezel, has been expanded in 2009 with this luxurious model that unites the glamour of diamonds and of mother of pearl with the prestigious watchmaking complication of the Moon Phase. Moreover, this is the first time that Bulgari creates a Ladies model with this complication.