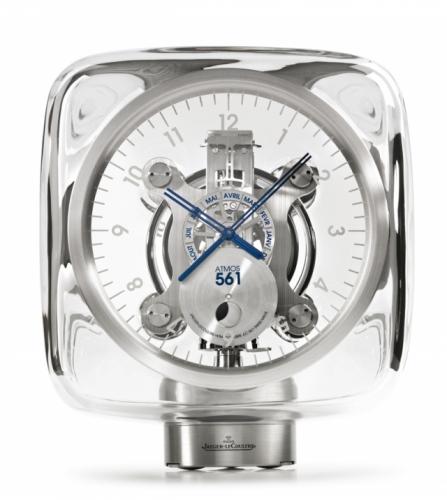 
The worldâ€™s only clock movement that runs on thin air has reached its eightieth birthday. The Atmos 561 was created to celebrate this landmark occasion; it is completely balanced and simple according to its design.

Since its invention, the Atmos has embodied the passion of its creator, Jean Leon Reutter. Designer Marc Newson, who has always been fascinated by the Atmos clock, has designed its case as a Baccarat crystal bubble, which brings out its ethereal nature, lends it a futuristic elegance and catapults it into the ranks of todayâ€™s great designs. This exceptional clock is being made in a limited series of 888 pieces. The Atmos 561 illustrates the creativity of its designer.

Born in Australia, 44-year-old Marc Newson was the one who, long attracted to Jaeger-LeCoultreâ€™s legendary clock, one day contacted the Grande Maison and offered a design for it. This suggestion was greeted with immediate enthusiasm: Jaeger- LeCoultre accepted his offer. In the Atmos 561 Newson managed to capture, in the staggering innovative power of his interpretation, the very essence of the Atmos clock, which for eighty years has symbolised the dream of quasi perpetual motion.

Cabinet:
bubble shaped, made by the Baccarat crystal makers 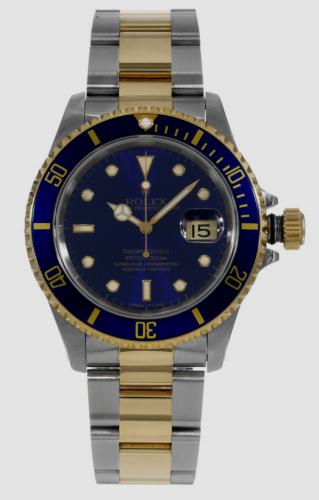 Ayrton Senna da Silva, was born in SÃ£o Paulo on March 21st , 1960 and died in Bologna Italy on May 1st , 1994. Ayrton was a Brazilian race car driver and three-time Formula One world champion. He was killed in a crash while leading the 1994 San Marino Grand Prix and still remains the most recent Grand Prix driver to die at the wheel of a Formula One car.

Senna began his motorsport career in karting and moved up the ranks to win the British Formula 3 championship in 1983. Making his Formula One debut with Toleman in 1984, he then moved to Lotus-Renault the following year and won six Grands Prix over the next three seasons. In 1988 he joined Frenchman Alain Prost at McLaren-Honda. Between them, Senna and Prost won fifteen out of the sixteen Grands Prix which took place that season, with Senna winning his first World Championship, a title he would go on to win again in 1990 and 1991. McLaren's performance declined in 1992, as the Williams-Renault combination began to dominate the sport, although Senna won five races to finish as runner-up in 1993. He moved to Williams in 1994, but suffered a fatal accident at the third race of the season at the Autodromo Enzo e Dino Ferrari in Italy.

Senna is regarded as one of the greatest drivers in the history of Formula One. He was recognised for his qualifying speed over one lap and held the record for most pole positions from 1989 to 2006. He was among the most talented drivers in extremely rain-affected conditions, as shown by his performances in the 1984 Monaco Grand Prix, the 1985 Portuguese Grand Prix, and the 1993 European Grand Prix. He also holds the record for most victories at the prestigious Monaco Grand Prix (6) and is the third most successful driver of all time in terms of race wins. However, Senna courted controversy throughout his career, particularly during his turbulent rivalry with Alain Prost, which was marked by two championship-deciding collisions at the 1989 and 1990 Japanese Grands Prix. 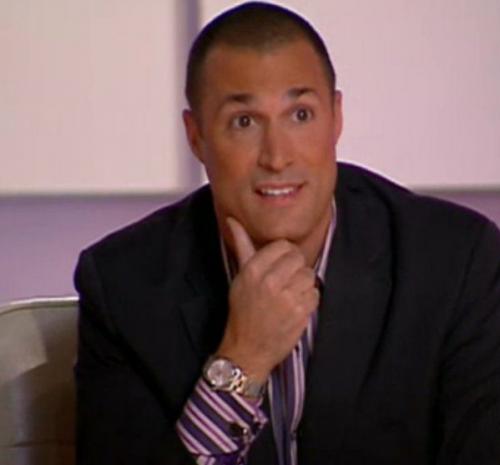 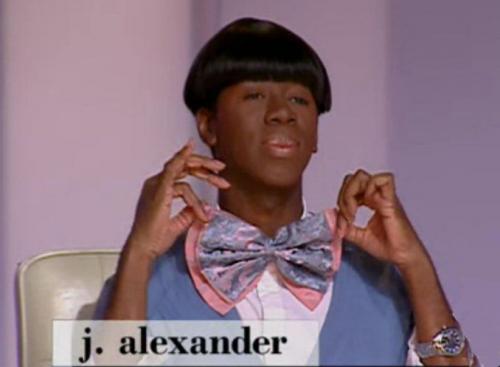 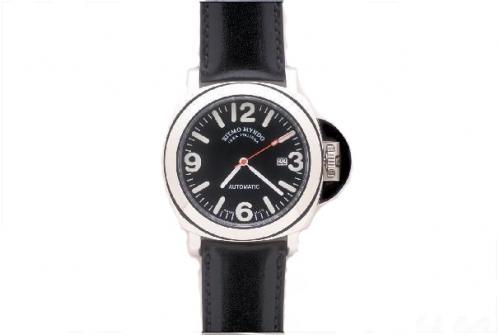 CSI: NY (Crime Scene Investigation: New York) is an American police procedural television series premiered on September 22, 2004. It was the second spin-off, indirectly, from the popular CBS show CSI: Crime Scene Investigation, and directly from CSI: Miami, during an episode of which several of the CSI: NY characters made their first appearance. 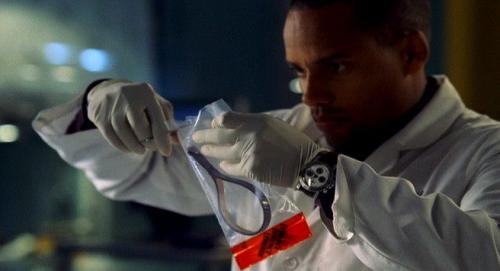 Gregory House, M.D., is a fictional character and protagonist of the American medical drama House. Portrayed by Hugh Laurie, the character is a maverick medical genius with two specializations, in infectious diseases and nephrology. He works as the Chief of Diagnostic Medicine at the fictional Princeton-Plainsboro Teaching Hospital heading a team of diagnosticians. 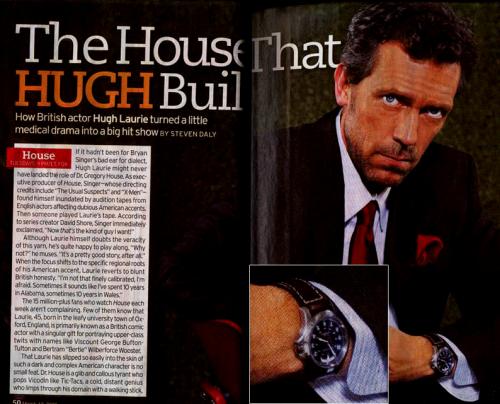 Heroes is an American science fiction television drama series created by Tim Kring. The series begins by telling the stories of apparently ordinary individuals who mysteriously develop superhuman abilities and who then seek to use them to prevent the end of the world as foreseen in images produced by a precognitive painter. 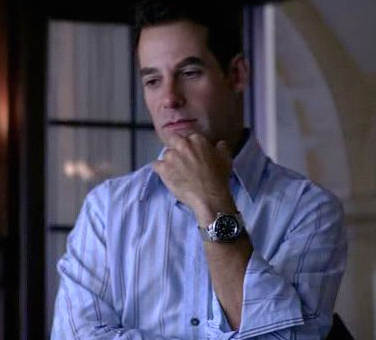 Greyâ€™s Anatomy is an American medical drama television series that follows the lives of five surgical interns, later residents and their mentors in the fictional Seattle Grace Hospital. Besides their careers the series also follows their personal lives. 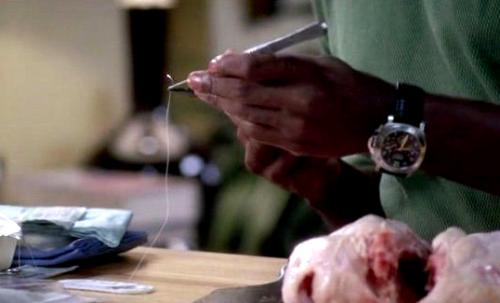 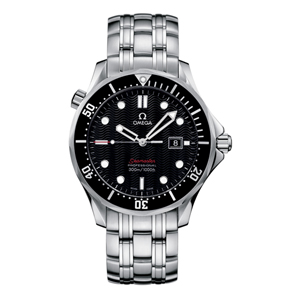 The Seamaster line offers an attractive elegant-sports watch, the Seamaster. This Omega wristwatch is water proof to 120 meters, it is used for all types of sports activities. The Professional Diver watch Seamaster (WR to 300 m) and Seamaster Chrono Diver were designed in collaboration with professional divers who know the importance of reliability and security.
The Seamaster line combines advanced technology with exclusive precious materials like: tantalum, titanium or pink gold - available with mechanical or quartz movements.
The Seamaster Professional Chrono-Diver features: push-buttons functioning to a depth of 30o m, screw-in crown, unidirectional turning bezel and 60-division minute circle with first 15 minutes bolder and helium escape valve. Anti-Reflective sapphire crystal and screwed back with protective cap for the movement.
The Seamaster 300 m. 7,1 GMT, with its innovative and elegant "black rubber" look, was introduced in 1998 for globetrotters' leisure or business wear. 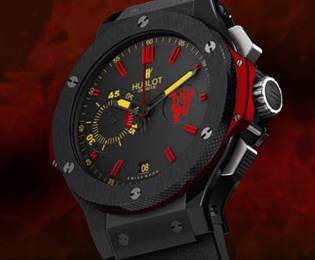 Swiss watch brand Hublot introduced a new Big Bang watch that commemorates its official timekeeper partnership with Manchester United football club. The new timepiece is called "Red Devil" as a tribute to Manchester's nickname.
Crafted from satin-polished black ceramic, the Hublot Red Devil Bang measures 44.5mm in diameter and features a strap in ribbed black rubber. Unique to the Red Devil Bang are bezel lugs in red composite resin; these eye-catching accents echo the dial details, most notably the Manchester United logo at 3 o'clock. It also features a 45-minute chronograph counter, specifically engineered to measure the halves of a football match, and it is fitted with glare-proofed sapphire crystals. It is water resistant to 100 meters.
Hublot will produce just 500 examples of the Red Devil Bang and each timepiece being individually numbered. A portion of the proceeds obtained from each sale will benefit the Manchester United Foundation which reaches out to young people through sports related activities. 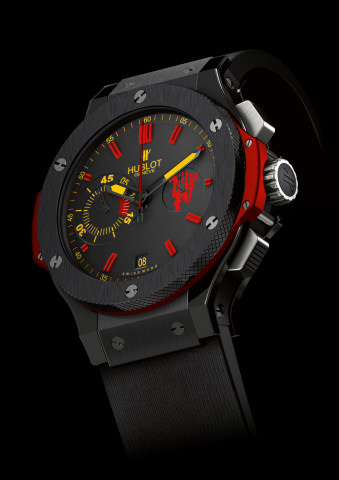 
CHECK OUT!
Hublot's Watches at Interwatches!