Limited edition of just 150 watches the Monaco V4. It is the only Tag Heuer watch made from platinum (170 grams of it), fact that gives to it its modern style.

The Monaco V4 changes inspired from car engines. Like mechanical watches, it engines has the same concepts: transmission, friction, torque and power. But, the Tag Heuer First uses a 4.25-gram platinum ingot which acts as a sort of cylinder, in a linear movement. Then, changes the transmission of power from the traditional wheels to a drive-belt transmission: 13 belts with a gauge measure of 0.5 x 0.45mm.


The Monaco V4 uses 2.2mm diameter bearings with 0.25mm balls rotating inside, rather than synthetic rubies to reduce friction acting as energy generators with bridges made of transparent sapphire.


The Monaco V4 wristwatch was presented at Baselworld in 2004. Then, in 2007, a production ready piece was shown. 2009 was the year in which the Monaco V4 watch version was finally presented. 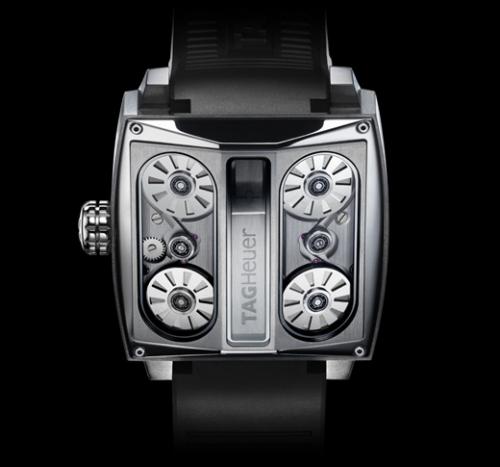