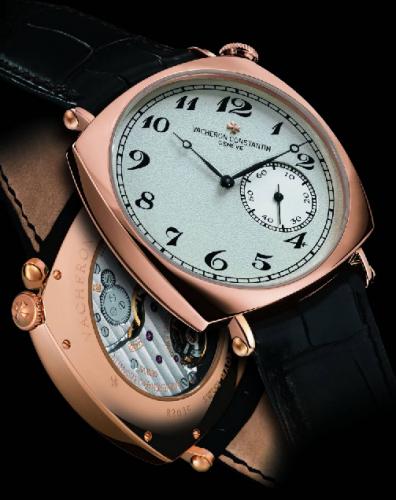 Geneva, Thursday October 29th 2009 â€“ Just two years after being awarded the 2007 Watch of the Year Prize (for the Patrimony Contemporary Retrograde Date and Day model), Vacheron Constantin once again takes the top spot on the winnerâ€™s podium with the 2009 Watch of the Year Prize, this time for its â€˜Historiques American 1921â€™ model.

Born of a determination to highlight the wealth of our heritage, its design is inspired by an avant-garde cushion-shaped wristwatch featuring a crown at 1 oâ€™clock, created for the crown in response to the wishes of an American client in during the Roaring Twenties. It blends creativity embodied in the daring style of the 1920s, with rigorous technical sophistication expressed through the new mechanical manual-winding Manufacture 4400 movement bearing the prestigious Hallmark of Geneva to which we are firmly committed.â€

Born of a determination to highlight the wealth of the Vacheron Constantin heritage, the â€˜Historiquesâ€™ line is intended to revive models symbolising the spirit and expertise of the brand through contemporary contemporary reinterpretations.

After presenting the reinterpreted ChronomÃ¨tre Royal 1907 on the occasion of its 100th anniversary, in 2008 Vacheron Constantin presented the â€˜Historiques American 1921â€™, a piece inspired by an avant-garde cushion-shaped wristwatch featuring a crown placed at 1 oâ€™clock and confidentially produced for an American client during the Roaring Twenties. In keeping with the spirit of that era, Vacheron Constantin has once again returns to creative roots by combining inventive design with rigorous respect for history in this eloquent tribute to the 1920s.

Radiating classic and understated elegance as well as genuine originality, this ultimate â€˜dandy-styleâ€™ watch faithfully echoes the original with a 40 mm-diameter cushion-shaped case crafted in 18-carat pink gold and distinguished by diagonal time read-off and a crown positioned at 1 oâ€™clock. The sandblasted dial is graced with 12 painted black Arabic numerals arranged around an equally black-painted railway track minute circle. The hands are in black oxidised 18-carat gold. Topped by a slightly convex sapphire crystal, the case is fitted with a transparent back enabling one to admire the exceptional finishing of the mechanical manual-winding Calibre 4400, developed and crafted in-house by Vacheron Constantin and bearing the prestigious Hallmark of Geneva. Beating at a frequency of 28,800 vibrations per hour, it measures 28 mm in diameter, 2.8 mm thick, and is endowed with an approximately 65-hour power reserve. This new model is water-resistant to pressures of 3 bar â€“ equivalent to 30 metres â€“ and is teamed with a hand-sewn saddle-stitched strap in dark brown alligator leather fitted with an 18-carat pink gold pin buckle shaped like a half Maltese Cross.

Produced in limited quantities, the â€˜Historiques American 1921â€™ is bound to delight connoisseurs and devotees of classic and daring fine watchmaking who are looking for distinctive timepieces and whose horological curiosity naturally draws them to its timeless aesthetic and functional qualities.