The X-Files is an American cult science fiction television series and a part of The X-Files franchise, created by screenwriter Chris Carter. It first aired in September 1993 and ended in May 2002. The show was a hit for the Fox network, and its characters and slogans (e.g., "The Truth Is Out There", "Trust No One", "I Want to Believe") became pop culture touchstones in the 1990s. 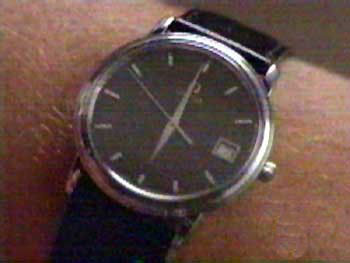 Vintage Omega
This vintage Omega was seen in the season six episode "Arcadia".

Popular Arts and Entertainment Network series which profiles the lives of notable figures in the history of entertainment, sports, arts, science, politics and warfare. The show is notable for its in-depth research, which often provides viewers with little-known information about well-known people. 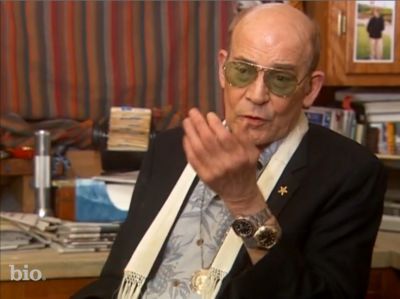 Andrew Zimmern hosts a program on The Travel Channel called "Bizarre Foods with Andrew Zimmern" in which he claim that he will apparently eat any creature that can be captured and served up for him, alive or dead. 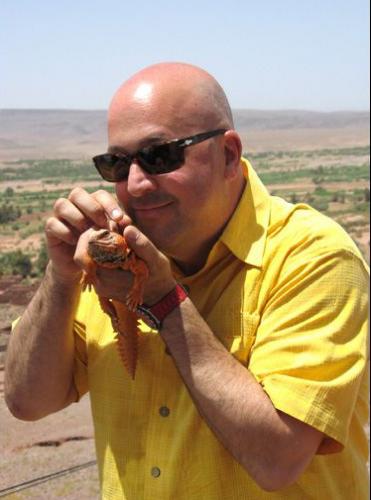 Burn Notice is an American television series broadcasted on the cable television channel USA Network since June 28, 2007. The show follows the life of protagonist Michael Westen (Jeffrey Donovan), a covert operative who has been "burned" and tries to find out why. 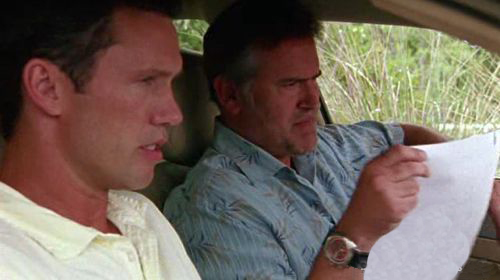 Entourage is an American comedy-drama that premiered on HBO on July 18, 2004 created by Doug Ellin and chronicles the rise of Vincent Chase, a young A-list movie star, and his childhood friends from Queens, New York City, as they navigate the unfamiliar terrain of Hollywood, California. The show completed its sixth season and is renewed for a seventh. 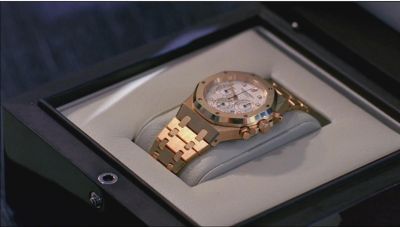 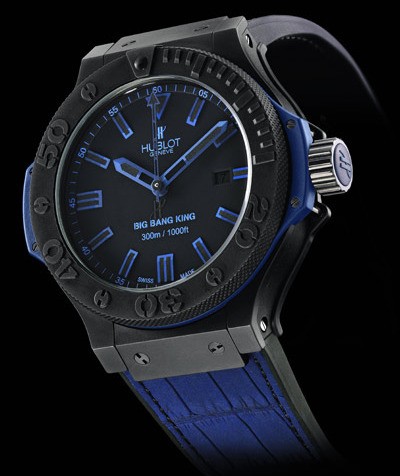 TheHublot Big Bang King All Black Blue watch gets to be a perfect diver's style timepiece. With 48m wide, it includes the 300 meters of water resistance, a diver's style face with large legible dial, and the rotating diver bezel (made of matte finished ceramic). The fact of being blue on the hands and hour indicators makes it seem to almost exist only on the periphery, even the insides are coloured black, the edges are all deep blue. Most of the watch is in matte ceramic. Inside is the HUB1400 automatic movement. The blue alligator strap makes it more flexible. According to its dial, it is a sandblasted and rhodium plated one. The watch is available in a limited edition of 500 pieces. 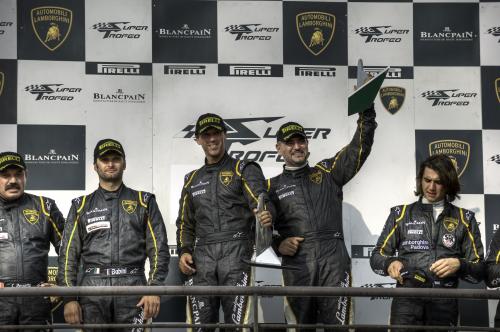 
The first season of the Lamborghini Blancpain Super Trofeo was brought to a magnificent conclusion in the sunshine of Provence. Marc A. Hayek and Peter Kox once again achieved impressive performances on the Paul Ricard track in Le Castellet. After six Grand Prix events comprising 18 races held between May and October, the Hayek and Kox pair competing with the Reiter Engineering team earned the 2nd spot in the team ranking. Blancpainâ€™s President and CEO also took 2nd place on the Pro-Am podium, while his co-driver from the Netherlands came 2nd in the Pro category. These spectacular final results set the crowning touch to the association of skills initiated a year ago between the Manufacture from Le Brassus and the Italian automobile manufacturer.

This alliance has also given rise to the Super Trofeo Blancpain Chronograph*, a limited series composed of high-tech materials and featuring a sporting look inspired by the automobile world. Snapped up immediately by eager enthusiasts, all 300 of these Super Trofeo chronographs have become instant collectorâ€™s items that give a foretaste of the forthcoming horological creations from the Manufacture, in cooperation with the engineers of the Italian firm. On the track side, the two next Lamborghini Blancpain

Super Trofeo seasons are already scheduled on the 2010 and 2011 racing calendars, and will once again feature the participation of Marc A. Hayek as a driver and standard-bearer for Blancpain â€“ title sponsor of the worldâ€™s fastest monobrand championship.

The high-powered alliance between two legends

Blancpain and Lamborghini have joined forces in creating an exceptional automobile championship. Played out over six events per year, the Super Trofeo stars a fi eld of the newest Lamborghini Gallardos. To celebrate these superlative races, the Manufacture in Le Brassus is presenting a Super Trofeo fl yback chronograph, a resolutely sporting watch with a production run limited to 300.


Encounters between two myths are bound to engender exceptional events. The alliance between the worldâ€™s oldest watch brand and one of the most iconic car manufacturers has resulted in the creation of an exceptional automobile championship. The Lamborghini Blancpain Super Trofeo is not only the fi rst Lamborghini racing series, but also to become â€“ right from the start of the fi rst race in May â€“ the worldâ€™s fastest and most demanding single-make championship.

Gleaming Lamborghini Gallard LP560-4 cars â€“ the latest version of this legendary model â€“ are to face off on six equally fabled race tracks during the year 2009. Each of these speed machines bears the colours of the watch manufacturer, while the car driven by Blancpainâ€™s President and CEO, Marc A. Hayek, is entirely dedicated to the brand.

For Marc A. Hayek and Stephan Winkelmann, respectively at the head of Blancpain and

Lamborghini, this partnership in a joint championship enables them to fulfi l the dreams of many devotees of exceptional mechanical engineering. When Lamborghini decided to join the race to push the boundaries of speed, its decision to work with Blancpain â€“ a watch brand renowned for its pioneering sprit and mechanical expertise â€“ was a natural choice for this high-octane union.
The fi rst single-make racing series in Lamborghiniâ€™s history, the Lamborghini Blancpain Super Trofeo 2009 features six European events scheduled from May through October, at Adria (Italy), Norisring (Germany), Spa Francorchamps (Belgium), Silverstone (United Kingdom), as well Catalunya (Spain) and Paul Ricard (France). 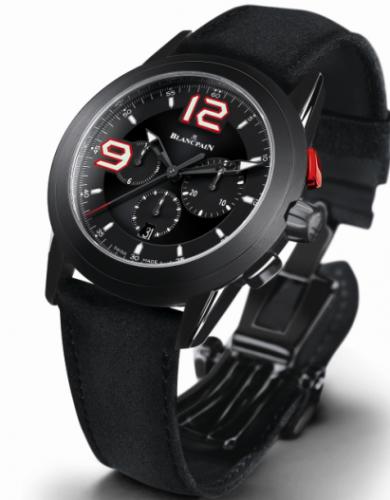 Boasting exceptional performances fuelled by 570 HP and 540 N/m torque enabling it to reach top speeds of over 300 km/h, the latest racing version of the Gallardo line from Lamborghini is a truly exceptional car. Its mettlesome character and its taut, sophisticated lines have inspired the Blancpain designers and master-watchmakers in creating the latest gem from the Manufacture in Le Brassus: the Super Trofeo Chronograph endowed with a fl yback function. Like the powerful engine of the Gallardo, this new Blancpain chronograph displays state-of-the-art design and all

The case specifi cally designed for this prestigious line is inspired by the sleek profi le of the Lamborghini Gallardo. Crafted in steel coated with a DLC (Diamond Like Carbon) treatment â€“ blacker than ruthenium and more resistant than PVD â€“ the 43.5 mm-diameter case that is waterresistant to 100 metres features alternating satin-brushed and polished surfaces. Highly sought after for its hardness and its anti-allergenic nature, as well as its intense colour, DLC treatment combines the properties of diamantine carbon (hardness, insulation, chemical resistance) with those of graphite (black colour, elasticity). Based on state-of-the-art technologies, DLC is a treatment applied in thin layers (sometimes less than 2 Î¼m) by a â€œ vacuum deposit â€ process. 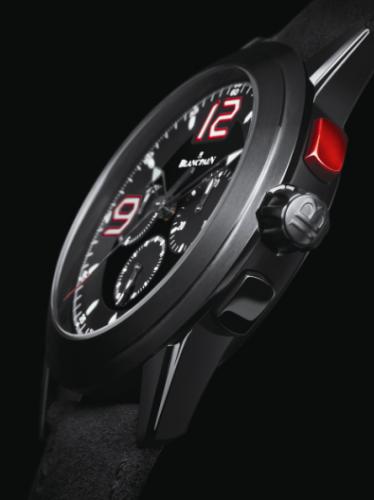 At this heart of this new sophisticated and performance-oriented case, the Blancpain Super Trofeo Chronograph, lies its throbbing â€œ engine â€, Calibre F185. To reinforce its dynamic nature, the movement of the Blancpain Super Trofeo has been coated by NAC â€“ a state-of-theart electroplating treatment that blackens the movement bridges and main plate. The mechanical self-winding Calibre F185 is endowed with a 40-hour power reserve and comprises 308 parts.

This movement powers a range of functions including hour, minute, small seconds and date display at 6 oâ€™clock, as well as the chronograph indications with a central sweep seconds hand, 30-minute counter at 3 oâ€™clock and 12-hour counter at 9 oâ€™clock. For instant-measurement enthusiasts, the Calibre F185 also drives a â€œ fl yback â€ function. The unmistakable black dial is distinguished by two red and white 9 and 12 oâ€™clock numerals stylised to evoke the numbers painted on the Lamborghini Gallardo LP560-4 racing cars. Another exclusive feature of this exceptional model is its gold oscillating weight engraved with the inscription â€œ Super Trofeo 2009 â€.

A sports model through and through, the Blancpain Super Trofeo Chronograph is teamed with a strap in alcantara â€“ like the seats in the Lamborghini Gallardo â€“ secured by a steel folding clasp. Available in a limited edition of 300 with its individual number engraved on the case-back â€“ the Blancpain Super Trofeo Chronograph comes in a presentation box inspired by the taut, opulent lines of the ultra-dynamic Gallardo.

Patrizzi & Coâ€™s Geneva auction of very unusual and rare works of horological art will take place on 25 October 2009. The pieces in the sale are all very unusual and several are destined to attract the attention of collectors including some fabulous Patek Philippe pocket watches and wristwatches and three exceptional Cartier pieces â€“ two chinoiseries clocks and a very rare and unusual Cartier Barometer made in 1930 in brass, silver, rock crystal, crystal, black and red lacquer and coral. This rare barometer is of dodecagonal shape and besides indicating the weather conditions, it also indicates atmospheric pressure relative to sea-level.

Among the pieces guaranteed to be much sought after are several prize winning Patek Philippe pocket watches and exceptional Patek Philippe Ref 1463 wristwatches. The Cartier chinoiseries pieces in the auction are superb examples of the Art Deco chinoiseries period. Chinese influence grew in Europe in the early 1900s when performances such as the opera Madame Butterfly first introduced the Chinese style and culture to Europe and created a new trend in high society, spurring the imagination of interior, textile and jewelry designers such as Cartier.

Louis Cartier systematically collected pieces of Chinese antiquity from the leading antique dealers of the time and his work reflected various themes from Chinese life and traditions while also incorporating pieces of actual material of Chinese origin such as enamel, jade, ivory, Chinese lacquer and mother-of-pearl marqueterie inlays. The Cartier carriage clock in this auction features an antique jade FÃ´-Dog (mythological lion sometimes called the lion of Buddha) sitting atop the clock keeping it safe from danger and the Cartier table clock incorporates typically Louis Cartier elements from Chinese antiquity such as the rows of coral lacquered cylinders in red (which is a lucky color in china), onyx, black lacquer, and mother-of-pearl.

Some of the magnificent wristwatches that will be offered during the auction:

A magnificent Patek Philippe, 18K yellow gold, keyless, â€œExtraâ€ pocket chronometer pocket watch with one minute Tourbillon regulator, adjusted by the famous master adjuster FranÃ§ois Modoux. To truly appreciate this watch you must look at its details, those not seen by the naked eye. It won the first prize at the 1929 Geneva Observatory, and to do this it had to be exceptional. Patek Philippe did not, as a rule, sell their Observatory Contest winning tourbillions. Out of roughly 100 tourbillons made by the company, approximately only a dozen were ever sold so this piece is very special. 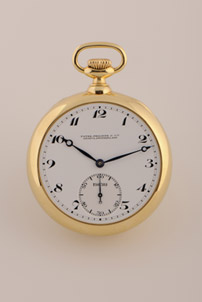 A fabulous one owner 1951 Patek Philippe chronograph with round button chronograph, register and tachometer in rose gold with a rose gold dial Ref 1463 which is in superb condition and is being put to auction by the original client. 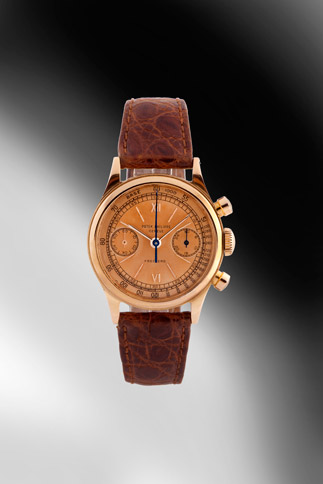 Two other watches in the Patek Philippe Ref 1463 series, a series that is much sought after and appreciated by collectors around the world, are also in this sale â€“ one watch is in stainless steel and has Breguet numerals (pictured), and the other is in yellow gold. 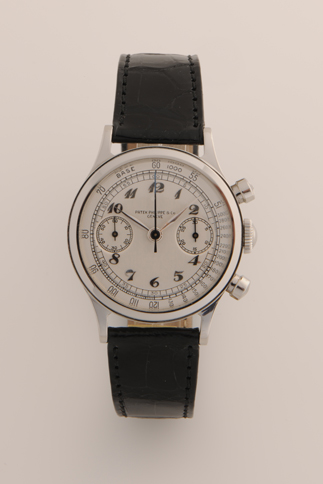 This e-mail address is being protected from spambots. You need JavaScript enabled to view it