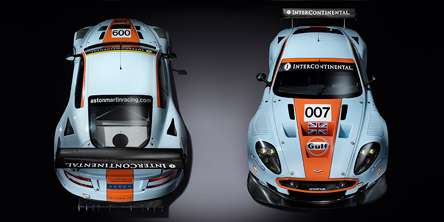 2009 was a great year for Aston Martin Racing. Exactly 50 years on from Aston Martin winning the World Sportscar Championship with the DBR1, the British marque was victorious in the Le Mans Series, taking the Team and Driver titles with its stunning LMP1 car. 2010 will again offer an exciting year for the partnership between Aston Martin Racing and Jaeger-LeCoultre, the teamâ€™s official Watch Partner.

New AMVOX Racing timepieces
Stay tuned: Jaeger-LeCoultre will unveil its latest timepieces in the AMVOX Racing collection during a upcoming race in Europe, powerful expressions of the strong parallels between fine watchmaking and fine mechanical engineering.

In addition, Aston Martin Racing will compete in three races prior to Le Mans which will provide the team with valuable on track experience prior to Le Mans. Starting with the 12 Hours of Sebring the the US then moving to the opening round of the Le Mans Series at Paul Ricard in France on 11 April before heading back to the US to take part in the Long Beach Grand Prix on 17 April.

Jaeger-LeCoultre is delighted to be the Official Watch sponsor of the Aston Martin Racing team and wishes the team success and victory again in 2010.