Tissot launches "In Touch With Your Time" 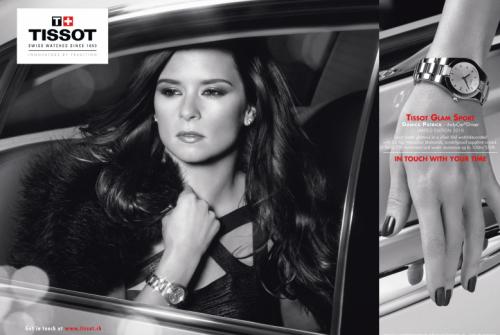 In its new global campaign, Tissot rewrites the rules of watch advertising by using the claim "In touch with your time" where, brand ambassadors like Danica Patrick, brand ambassadors present luxury as being accessible rather than exclusive. This striking black and white print campaign originates from the lens of the Los Angeles based art and fashion photographer Jeff Burton. The refreshing approach of the resulting campaign provides further visible proof of the established Tissot signature: "Innovators by tradition". 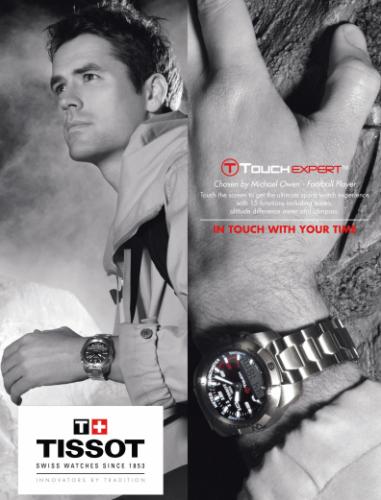 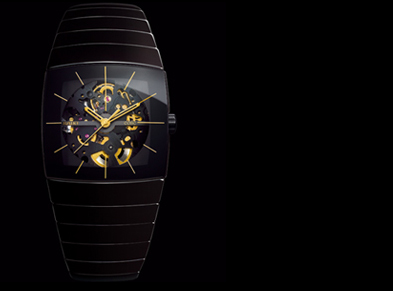 The firmly established Sintra collection is now ready to reveal the latest member of its family. The new Sintra Skeleton Automatic is the first in this Rado collection to feature this special movement. A movement custom made for Rado, all in black.

The definitive design of the barrel shaped case and bracelet is highlighted by the fusion of seemingly endless curves and lines. The timepiece is agile yet robust. 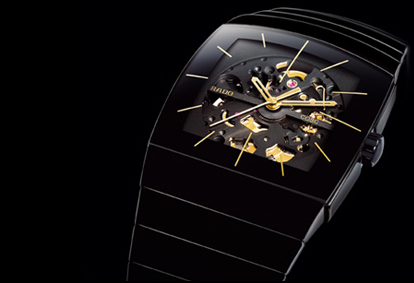 Innovative and striking. The COSC certificated skeleton movement in the black convex case produces an effect that has never been seen before in this collection.

Bold and mesmerizing. Available in one size.
111 pieces - Limited Edition for Basel 2010.

One of Movado's Watch Brand Ambassadors 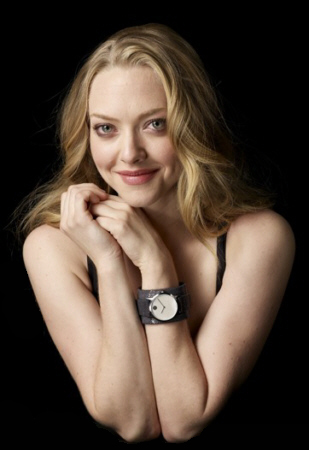 Amanda She began her career as a child model when she was eleven and when she was fifteen she began her career as an actress; starting off with an unaccredited role and going on to have a recurring role on a television series, which expanded into her having a successful television career. She is best known for her roles as Sophie Sheridon in the feature fil Mamma Mia! And as Karen in Mean Girls.

Seyfried was born Amanda Michelle Seyfried in Allentown, Lehigh County, Pennsylvania, United States on December 3, 1985. Seyfried's mother, Ann (nÃ©e Sander), was an occupational therapist, and her father, Jack Seyfried, was a pharmacist. Seyfried has one older sister; Jennifer Seyfried, who is a musician in the Philadelphia organ-driven rock band Love City. Amanda graduated in 2003 from Allentown's William Allen High School.

She is currently appearing in the critically claimed HBO series, Big Love. This fall, Seyfried will be seen starring in the Fox film, Jenniferâ€™s Body, written by Diablo Cody (Juno). She will then star in the Lasse Hallstrom directed film, Dear john, the adaptation of the Nicholas Sparks novel (The notebook). She began filming Chloe in Toronto in February 2009. It is a remake of the French film Nathalie, also starring Liam Neeson and Jualianne Moore. Her other credits include Veronica Mars, Alpha Dog and Rodrigo Garciaâ€™s Nine Lives. 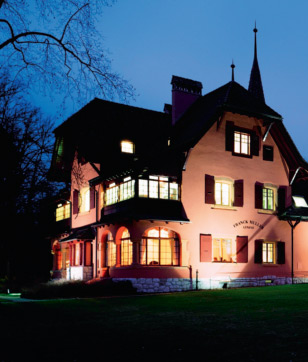 Franck Muller, born in 1958, is a relevant designer and a Swiss wristwatch manufacturer. He is well known for producing nearly the most complex timepieces, completely based on the classical mechanic principles. (To read about Franck Muller History, click here).

The classical mechanic principles come to be a mechanic formulation so that is able to describe the movement of macroscopic physics particles systems, also to low speeds compared to the light speed.
The timepieces produced by Franck Muller come to be the result of an engineering sum in extremely small scales, fine jewelery, design refinement and patience, in an extremely delicate and precise craftsmanship, that requires months or even years of hard work, in a strong contraposition to electronic watches.

The exclusiveness of this timepieces is related to the more than experts hands that are required, so, as a consequence in a high price to pay for them and that they are really desired by collectors, they are more frequently founded as replicas in auctions or though internet sale.

Between the many exclusive and wellknown us Franck Muller users, we can find: Dmittry Medvedev and George W. Bush
Celebrities such as Elton John, Demi Moore, and Robin Williams are often spotted wearing Franck Muller replica watches. 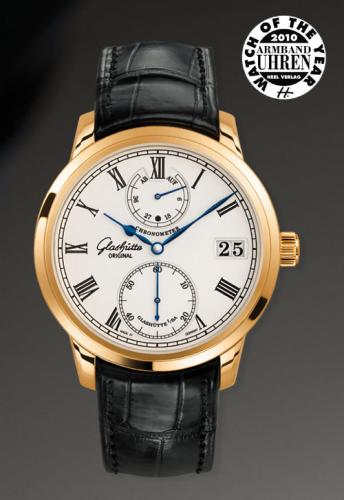 For 165 years, the name Glashutte has been a synonym for high-quality watchmaking, German accuracy, and superb design as, from the smallest screw to the most complicated watch movement, timepieces by Glashutte Original are manufactured in the highest degree of production depth, with a great deal of the work done by hand. 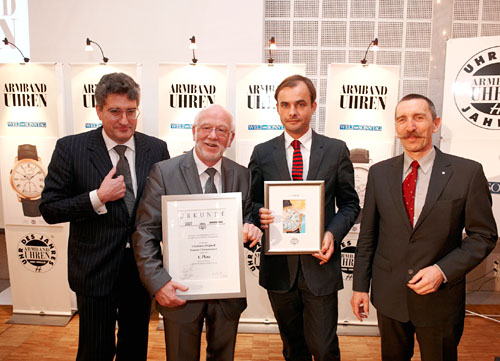 On March 2010, several representatives from the watchmaking industry gathered in the Hotel Plaza in Basle to participate in the announcement of the winners of the â€œWatch of the Year 2010â€. 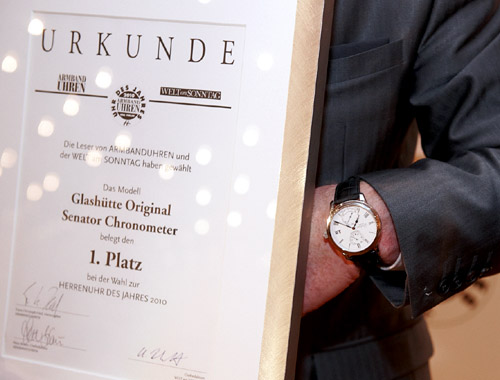 A total of 159 timepieces were nominated in the category of menâ€™s watches. The votes could be submitted either by postcard or online. Peter Braun, chief editor of Armbanduhren, was the one to declare that the Glashutte Senator Chronometer had been chosen as the â€œWatch of the Year 2010â€. With great pride, GÃ¼nter Wiegand, Managing Director of Glashutte Original, accepted the coveted award on behalf of all the employees of the Saxon watch manufacturer. 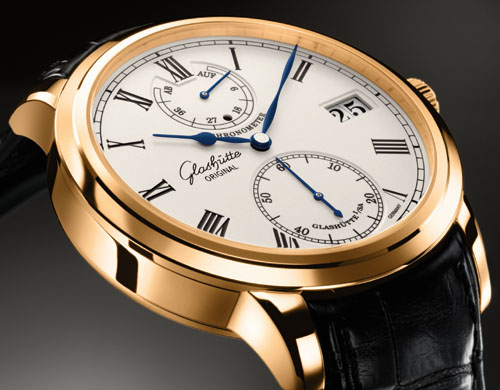 A total of 11,147 readers took part in the vote. Of these, 637 voted for the Senator Chronometer as winner. 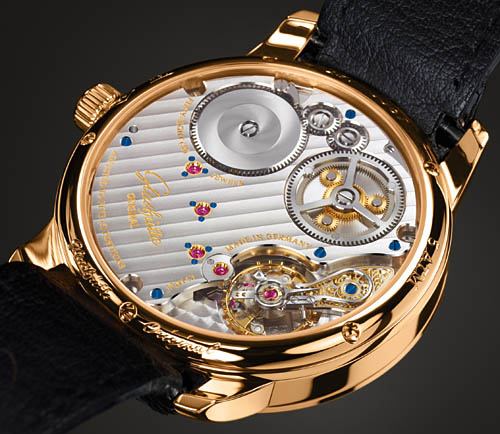 â€œWatch of the Year 2010â€Â  The Senator Chronometer is the first officially certified chronometer from Glashutte Original.