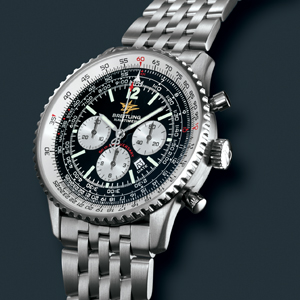 
In its fifty years of existence, the Navitimer has acquired cult-object status, joining a select circle of modern, ultra-functional and timeless objects that made their mark on the 20th century. The Navitimerâ€™s form, spirit and essence have remained unaltered since the first model in 1952, the famous â€œ806â€. It is currently the worldâ€™s oldest chronograph in uninterrupted production. To celebrate this 50th anniversary Breitling has chosen to issue a special version carrying the original emblem of the era consisting of two stylized planes, the graphic design which Breitling traditionally reserved for this model. The integrity of the Navitimer has been scrupulously respected, notably including the slide rule for which this model became famous and which faithfully replicates the logarithmic scales and graduations of the first models. The chronograph counters are arranged in their original configuration at three, six and nine oâ€™clock and the steel case in entirely satin-brushed.