Girard-Perregaux dates from 1791 and from that time has always expressed the combination of the two qualities that have most contributed to its success: technical skill and commercial instinct. Among the most exceptional watches under the Company’s name is the Tourbillon Three Gold Bridges, awarded the Gold Medal at the World’s Fair in Paris in 1867 and in 1889. The Company has become internationally known only fairly recently, and owes its rapid expansion to its own interpretation of “global manufacturing”, that is, the real production capacity to move from making single components and all kinds of movements to the design and realization of exclusive, top quality pieces.

1967 fully 73% of the chronometers certified by the Neuchâtel Observatory were Gyromatic H.F. 1968 - The Swiss industry is astounded by the potential of quartz: many of the old Houses step back from the new invention, but not Girard-Perregaux. It is the first to start industrial mass production of a Swiss made quartz model. Its oscillator frequency (32,768 Hertz) will subsequently be adopted as a world wide standard.

1987 - The GP 7000 is shown, a chronograph that is to become a great classic of contemporary sports watches and that will encourage the House to develop bonds with the sporting world of great competitions.

1991 - Influenced by the surge of revivals of the great complications of the past, Girard Perregaux presents a re-edition of the Tourbillon Three Bridges as a wristwatch at the Basel exhibition. This model is an indication of the ability and the ambitions of the Manufacture, which does not hesitate to test itself with an historical product while being attentive to the present and the future markets.

1993 - GP presents its Tribute to Ferrari, a split second automatic chronograph bearing the symbol known throughout the world: the rearing horse on a red ground, the Maranello flag. This was the start of an important association for the Swiss Company. The “pour Ferrari” group of watches will become a collection, in fact, enlarged year after year for a public devoted to its clean lines and elite and technological characteristics.

1994 - The capacity to make its own movements is an important and fundamental objective for all watchmaking companies. This year the movements GP 3000 and GP 3100 are introduced and will shortly equip all the House watches.

1995 - The collection “Laureato” is created, the first Girard-Perregaux “integrated” watch. The Company banks on this model that is characterized by an octagonal bezel and a decidedly sporting look. The chronograph version is chosen, in 1996 for the limited number edition of 999 pieces that the Manufacture has dedicated to each Olympic year since the turn of the last century.

1996 - Presentation of F50, an even stronger Ferrari link. Inspired by one of the most famous cars in the history of automobile racing, the chrono perpetual celebrates the 50th anniversary of the Maranello company and its own 205th anniversary. The new complication is a split second chrono with tourbillon and minute repeater. Two more models are added to the Vintage collection: the split second automatic chronograph, with a softened squared case, and the refined ladies model called Vintage Baguette. The new little automatic alarm calibre 2291 with a second time zone is mounted on Traveler II.

1998 - Girard Perregaux is recognizably among the most active companies in the field of quality watchmaking. Its new star is the Petit Tourbillon for which the GP craftsmen succeeded in miniaturizing the famous “Tourbillon Three Gold Bridges” movement in a 31 mm diameter case without distorting its technical characteristics. The ladies versions of Laureato and Vintage, dedicated to the alchemy of gold and diamonds, are greatly admired; the Lady “F”, sports models dedicated to women and the Ferrari legend, are a natural development of the men’s versions. Significant space is also given to the men’s collections of the latest trends - like the Vintage 1945, “clothed” in fabulous cashmere and tasmanian wool from the Lanificio Loro Piana. The new “pour Ferrari” chronograph, the 250 TR, is dedicated to the Testa Rossa, whose silhouette is engraved on the back case. This, “three counters” model, with respect to the others, has a small section on the dial for the 24 hour counter in place of the traditional minute counter whose hand, in this instance, is next to the second counter. 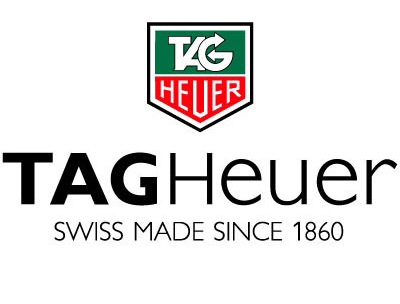 TAG Heuer is one of the leading watch manufacturers in the world and the fourth most important watch seller in the wristwatch market. Its company motto "Swiss Avant-Garde Since 1860" characterizes the company's spirit, based on fascination within excellence in design and advanced technology. Progress, precision and innovation have always been the expression of the very core of TAG Heuer's philosophy.

In 1860 Eduard Heuer established his first workshop in St. Imier, Switzerland giving birth to what would be the world's reference of reliability and prestigious sports watches.

In 1869, Heuer invented and patented the first stem-winding system. Then, in 1911, Heuer launched his first dashboard chronograph developed for automobiles called Time of Trip. Five years later, he patented Micrograph, the world's first wristwatch with chronometer function. This unique model was capable of measuring 1/100th a second. In 1920, for the first time ever, the company officially time-kept the Olympic Games competitions.

In 1933 Heuer introduced the Autavia, the dashboard timer used for automobiles and airplanes. Afterwards, the Monte Carlo and the Master-Time were launched. In the 1950-70s, Heuer timepieces were utterly popular in auto sport.

The Autavia chronograph was launched in 1962. Two years later, after Juan Manuel Fangio's triumph during the "Carrera Panamericana Mexico" race, Jack Heuer launched Carrera Chronograph watch paying tribute to this excellent race car driver born in Argentina. Due to its exceptional success, the Carrera Chrono turned into the company's icon.

Again, in 1966, the Heuer Company established his pioneer status according to time measuring by manufacturing the world's first chronograph, capable of measuring 1/1000th a second.
In 1971, the Heuer Monaco watch became highly famous after Steve McQueen wore it in a "Le Mans" movie. That line was called "Steve McQueen Monaco Edition".

At the same time, TAG Heuer introduced wide-reaching its completely new haute couture collection, including the fine Diamond Fiction wristwatch that has 900 diamonds approximately. It shows time by lighting an LED from behind thousands of tiny diamonds. With that superb collection, TAG Heuer attested to its ability for luxury-oriented first class company.

This year, Blancpain is presenting its first Annual Calendar combined with the GMT function – an original association of these two complications enriching the Villeret collection and providing further proof of the innovative spirit cultivated by the Manufacture from Le Brassus.

The Villeret Annual Calendar GMT is equipped with the new Calibre 6054F developed by Blancpain’s R&D teams. This self-winding movement requires just one date adjustment per year, at the transition from February to March. For all other months, the watch itself moves on from the 30th or the 31st to the first day of the following month. It also has a small 24-hour hand in a subdial at 8 o’clock, which serves as a reference time. The GMT function is provided by the central hour hand of the watch, which is linked to the date. The generously sized date apertures are arranged in such a way as to ensure optimal readability.

This new model is available in white or red gold versions. The hands and hour-markers on the stamped opaline white dial match the material of the case, which is equipped with Blancpain’s under-lug correctors system. The corrector at 1 o’clock serves to modify the day, and the one at 5 o’clock to adjust the month. Fast GMT, date and time-setting adjustments can be made using
the crown. The sapphire crystal case-back of the 40 mm-diameter case reveals the ingenious mechanism of the movement and its guilloché-work oscillating weight. The alzavel-lined alligator
leather strap is fitted with a triple-blade folding clasp ensuring optimal user friendliness. 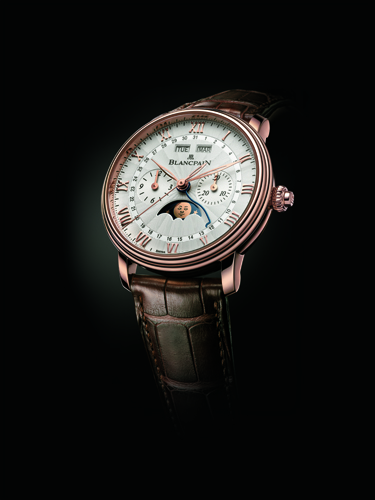 Pursuing its reinterpretation of the Villeret collection undertaken in 2010, Blancpain is now presenting a single-pusher chronograph with complete calendar and moon phases. In addition to the technical challenge involved, this original combination called for particular attention in order to preserve the readability of the dial and the stylistic purity of this model, thus ensuring harmony with the traditions of the collection.

This model in the Villeret collection is equipped with Calibre 66CM8, a movement that emerged only recently from the workshops and was built on two principles: ensuring optimal user friendliness and preserving the understated elegance of the watch of which it will become the beating heart. User friendliness is ensured by the protection of the complete calendar and moon-phase mechanisms. These complications, based on a set of complex and delicate gear trains, have been redesigned in order to avoid any risk of damaging the movement. The indications are adjusted by means of under-lug correctors, a patented Blancpain innovation ensuring fast correction without any need for a dedicated pointed instrument.

These technical choices, as well as the traditional solution of a single pushpiece controlling the chronograph, guarantee the pure profile of the case and the clarity of its dial, both signature features of the Villeret collection. The blued steel serpentine date hand is a symbolic reference to the roots of watchmaking, which traditionally used this kind of hand to distinguish between complementary types of information. The transparent sapphire crystal case-back invites admirers to discover the quality of the finishing on the movement and its guilloché-work oscillating weight.

This new member of the Villeret family measuring 40 mm in diameter is available in a red gold version with a stamped opaline dial or in steel with a white dial – both fitted with an alzavellined alligator leather strap secured by a folding clasp.

Extremely well known as "the father of the chronograph", George Graham (1673-1751) has also been the man who had great ideas and invented the first wall chronograph or mercury pendulum.

Commissioned by the Greenwich Royal Observatory to create the master watch used by the astronomers, Graham became the first and great watchmaker of eighteenth century named by the Royal society. To continue with this spirit of extraordinary innovations and technical ability, Graham is nowadays a contemporary firm of watches dedicated to those who are enthusiastic about mechanic arts.

Open minded and with a great interest for interchanges among people working on the same field, Graham had undoubtedly approved the Swiss idea of re-establishing the British traditions of high watchmaking and recovered its rich patrimony.

The "British brand made in Switzerland" creates amazing wrist watches giving special attention to the design as well as the functions of the watch.

The Graham watches evoke a powerful fascination among experts and collectors who are moved by aesthetically funny objects, which combine exclusivity, originality and vanguard together with the excellence of traditional knowledge.