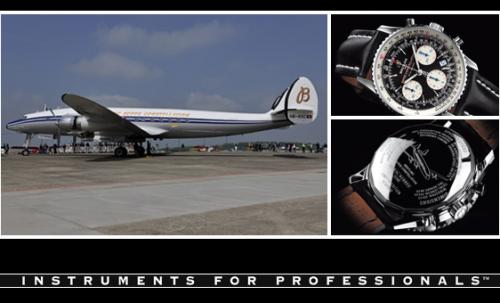 After a temporary grounding period for maintenance work, the famous Breitling Super Constellation – one of the world’s three remaining flightworthy «Super Connies» – is preparing to take to the air once more. In a ceremony held on April 30th in Germany, Breitling renewed its financial support for the preservation of this legendary aircraft. The brand also announced the launch of a limited edition Navitimer chronograph that will delight devotees of the Super Constellation, while serving to raise funds to secure its future.

For aviation fans, the Lockheed L-1049 Super Constellation remains one of the finest symbols of the conquest of the skies. Equipped with four ultra-powerful «turbo-compound» engines, this magnificent propeller-driven long-haul plane dominated civil aviation in the 1950s and established itself as the «King of the Atlantic». It is also famed for its incomparable silhouette featuring a dolphin-like curved fuselage and triple-tail design.

The Breitling Super Constellation «Star of Switzerland» is one of the last three «Super Connies» in flightworthy condition on the planet, and the only one based in Europe – as well as the only one equipped for passenger flights. Built in 1955, it was restored in the 1990s by a group of passionate devotees and made its grand comeback to the Old Continent in 2004. Since then, it has regularly taken part in various air shows, and each of its appearances is enthusiastically greeted by spectators.

Over the past few months, the Breitling Super Constellation has undergone various maintenance operations, particularly for corrosion issues. These hundreds of hours of work have also served to give it a new paint job featuring an elegant blue line accentuating its aerodynamic profile. The «Star of Switzerland» is now ready to take off again.

The plane was officially presented on April 30th in Lahr, in the Black Forest region of Germany, before representatives of the press and guests of the brand, and in the company of quadruple Olympic ski-jumping champion and «godfather» of the Breitling Super Constellation, Simon Ammann. During the ceremony, the latter presented the «Super Constellation Flyers Association» with a check for 200,000 Swiss Francs on behalf of Breitling in support of the endeavours to safeguard this historical aircraft.

The brand has also decided to launch a limited edition of its legendary Navitimer aviation chronograph, the sale of which will fund another 200,000 Swiss Franc check for the association. Issued in a run of 1,049 – in tribute to the Lockheed L-1049 – this exceptional instrument bears the inscription «Breitling Super Constellation» on its dial, as well as a golden B shaped like the 1950s logo, an initial also echoed on the plane’s three rear stabilizers. The caseback is engraved with the technical specifications of the «Super Connie» as well as its silhouette appearing in a medallion.

By supporting the safeguarding of the Super Constellation, Breitling confirms its determination to preserve the heritage of aviation – the magnificent adventure with which its own history is so closely entwined.