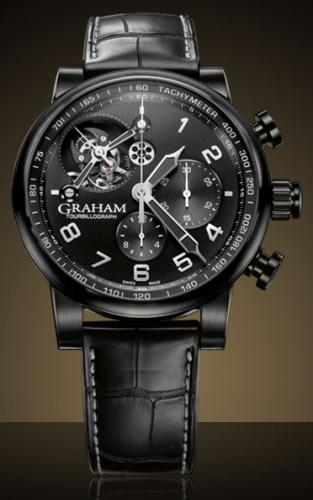 Made to live an adventurous life. The Silverstone Tourbillograph Full black is an automatic column-wheel chronograph-tourbillon. An automatic one-minute Tourbillon with a powerful design and a rich technological content. The watch offers the beauty of one of the best see-through Tourbillon cage and the resistance of a military watch. The reduced number of components, lightness and double-bridge construction guarantee stability and perfect rigidity. Perfect to live at full speed 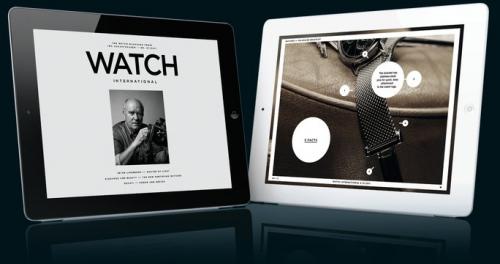 The jury was unanimous. In the red dot award: communication design, one of the world’s biggest and most prestigious competitions of its kind, the Swiss watchmaking company’s app for the iPad, IWC WATCH International 1/2011, earned a much-coveted red dot. In a process lasting several days, the 15 jurors – without exception internationally respected design experts – assessed every single one of the 6,468 entries. Of these, just 608 received a red dot award. All the prizewinning exhibits will be on show at a special exhibition entitled “Design on stage – winners red dot award: communication design 2011” at the Alte Münze in Berlin from 7 to 16 October 2011.

“We are proud to have won one of the most coveted design awards. The iPad app is an ideal platform for the artistic qualities and unique appeal of WATCH International and makes it available to a much wider readership,” says Karoline Huber, IWC’s Director of Marketing & Communications. The attractively presented digital version of the magazine also offers additional visual material and audio files, and gives users a unique insight into the world of IWC. The WATCH International app for the iPad can be downloaded free of charge from the iTunes App Store. 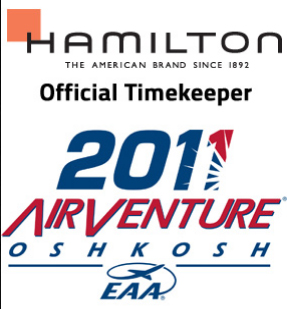 For one week each summer, EAA members and aviation enthusiasts totaling more than 500,000 from more than 60 countries attend EAA AirVenture at Wittman RegionalAirport in Oshkosh, Wisconsin, where they rekindle friendships and celebrate the past, present and future in the world of flight. "The World’s Greatest Aviation Celebration" has it all when it comes to aircraft: over 10’000 Warbirds. Vintage. Homebuilts. Ultralights! The spirit of aviation is reflected all around through impressive daily air shows like aerobatics, pyrotechnics, through concerts, fly-in theatre, forums, workshops and demonstrations. Hamilton is official timekeeper and will be exhibiting on the booth 3131 in hangar C from July 25th - 31st, 2011. Visit EAA AIRVENTURE 2011 SITE! 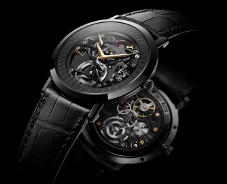 
For the fourth consecutive time, Piaget is supporting the Only Watch charity auction. This exceptional event, held every two years in Monaco during the Monaco Yacht Show, is under the patronage of HSH Prince Albert II. All the proceeds from this auction go to support research on Duchenne Muscular Dystrophy. This disease is characterized by a progressive weakening of the muscles which results in respiratory and cardiac problems which can prove fatal to children.

The quest for excellence and the development of new calibres illustrates Piaget’s capacity for innovation. Its unique ultra-thin watches as well as its creative interpretations of the finest horological complications establish the brand at the very peak of watch movement manufacturing traditions. Calibre 838P Skeleton is one of these creations that highlight the brilliant skill of the in-house artisans. This year, for Only Watch 2011, Piaget is offering for the first time an Altiplano Skeleton watch with a black PVD treatment. In accordance with the tradition of this charity auction, the Altiplano Only Watch 2011 is a one-of-a kind creation.

Prior to the auction that will take place during the Monaco Yacht Show on September 22nd; the public will have the opportunity to discover the Altiplano Skeleton, and the other 19 participating watches, in various locations around the world.

Ulysse Nardin is honored to celebrate the 50th Year Anniversary of Thai Airways by creating the Dual Time 42 mm in a Limited Edition for the Golden Jubilee – a timepiece for people on the move.


Provided with a dial decorated with the logo of the airlines company origin, the timepiece houses a self-winding movement with unique time zone quick setting and permanent home time display.

No world timer is easier to use - the most practical mechanical Dual Time system with a patented instant time zone adjustment.