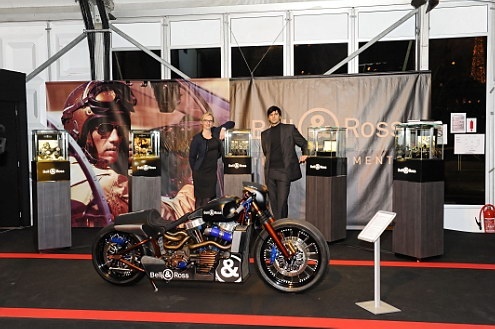 The 27th International Automobile Festival took place on Janueary 25th at the Hotel National des Invalides in Paris with Bell & Ross as main supporter of the event.
The International Automobile Festival in an event that has set the standard in the world of automotive design. Bell & Ross not only supported the event but also presented an exclusive watch collection and introduced for the first time in France the Nascafe Harley Davidson motorcycle, the culmination of a collaboration between Bell & Ross and Shaw Harley Davidson, winner of numerous Custom Harley Davidson championships in the United States.
At the festival, Member of the jury, Carlos A. Rosillo, CEO of Bell & Ross, and sponsor of the ceremony, awarded the prestigious Palme d'Or to Sebastien Loeb for his eight consecutive titles at the World Rally Championships (WRC).
Approximately 600 people including designers, car manufacturers, media and members of Jury took part in the official ceremony were fourteen grand prizes were awarded celebrating the work and talent of both individuals and companies.