Organised by the Cruising Yacht Club of Australia The Rolex Sydney Hobart Race begins at 1 pm on 26 December when over 100 sailboats cross the starting line in Sydney Harbour.
Two yachts with a shared history claimed the main prizes at a memorable 70th edition of the Rolex Sydney Hobart Yacht Race. Driven by facing her most fearsome opponent in years, Bob Oatley’s Wild Oats XI made history by claiming a record-breaking eighth line honours victory. Some 29 hours later, Oatley’s original Wild Oats arrived in Hobart with a corrected time finish that would ensure overall victory and the coveted Tattersall’s Cup trophy. Oatley’s former boat, the 43-ft Wild Rose, owned and skippered by his friend Roger Hickman, secured her second victory in the race, 21 years after the first.

How much do you know about the most admired dive watch, Rolex Submariner?

Are you a watch enthusiast, watch collector or just a lover of Rolex watches? Do you know the story?

The Rolex Submariner was launched in 1953 but it actually started 1926 when Rolex presented the most admired Oster case.  In 1930, the so called Oster case became more resistant to water and dirt.  In 1930 Rolex started to produce the Oster case watches which was designed to keep away from dirt and durable in case of accidental water exposure.
In the mid of 1930, Panerai, an Italian company had supplied underwater equipment for the Italian Navy.  Italian Navy had made an order to purchase of Italian watches, but Panerai didn’t have the capacity to create the watch that why they made a partnership with Rolex.

Rolex decided to make its own genuine Dive Watch in 1950.  It was an idea of Rolex Director and Marketing Executive Rene-Paul Jeanneret who was also a diving enthusiast.   His ideas and experiences in diving gave him the idea of the technical and design requisite of a dive watch.
Rolex made a remarkable move by submerging a Rolex dive watch on a submarine vessel’s exterior. Rolex dive watch was appeared to be functioning normally and not affected at all.
It was on the same year when Rolex had presented the first Rolex Submariner dive watch. Rolex Submariner was water resistant of up to 100 meters but they soon have increased it to 180 meters. The watch featured a knurled rotating bezel with clear marking in five minute increments and arrow shaped zero marker with luminous dot pointing towards the center. Rolex submariner was called it the “Divers Companion”.   The Rolex Submariner had a matte, black dial, large luminous markers and luminous hand for hours, minutes and seconds.

The watch has been tried out thoroughly and passed all the assessments. Rolex Submariner had endured a total of 132 dives with depths of 12 to 60 meters for the period of five months.  According to the statement from the Institute for Deep Sea Research in Cannes on October 26,1953.  The issued statement of the Institute was read as follows:  “Despite the extremely high salt content of the Mediterranean  waters,  and  the  tropical  temperature and  humidity  to which  the watch  was exposed  between  the individual  dives, it showed no corrosion at all.... Likewise, no moisture was detected within the watch.  All other  previous  tests with  water-resistant  watches  from top brands  showed  water  penetration from  the first moment  of the dive, indicated  by the condensation that formed on the inner surface of the crystal. The watch    as worn multiple times during dives with an extended crown (i.e., the crown was pulled out to the position for setting the hands). To conclude these tests, the watch was attached to a thin cord and dropped to a depth of 120 meters — twice as deep as 60 meters, the maximum depth achievable with self-contained co   pressed air equipment. No leaks were detected even after a one hour period at this depth.”
In order to improve the qualities of Rolex Submariner, Rolex acquired many of experts’ advice.  The unique crown guard shape that we now relate with Rolex Submariner was launched in 1959.
The introduction of Rolex Submariner was concurred with another remarkable Rolex diving feat.  The Submarine Trieste, with its 2-meter wide pressure sphere, big enough to hold to people, descended for the 65th times into the depths on January 23, 1960 with the aim of reaching Challenger Deep in Marian Trench, the deepest part of the ocean. The Rolex diving has 2 men namely Jacques Piccard and an American Marine Lieutenant Dan Walsh.  There was a very special Rolex prototype, a watch with Oyster case which was designed to withstand the pressure in the vessel of about 10,916 meters descent which exerted a pressure on the vessel of about 1,125kg/cm.  The idea was to prove that Oyster case can survive  the ordeal.
Excitement was great to see the result and it was a tremendous amazement that the watch is still working the same. For more than 50 years, Rolex Submariner has always been the best Divers’ Companion.


Here’s our own collection of Rolex Submariner Watches. For 2014, TAG Heuer has once again released a brand new version of its iconic Formula 1. This time, the Formula 1 gets a totally unique automatic mechanical range to supplement the Formula 1 quartz watch offerings. Over the last few years, TAG Heuer has really gone all over the place in regard to trying to figure out what to do with its Formula 1 range. The TAG Heuer Formula 1 Automatic collection for 2014 is pretty good in regard to design and personality, but the question is... should this be the direction TAG Heuer takes its Formula 1 watch collection? Let's put things into context again. The TAG Heuer Formula 1 was for a long time a great looking entry-level quartz watch for the brand. Early on, they had cool colorful plastic bezels and really neat dial designs. A few years ago, they grew up to be the daily quartz beater watch we all wanted. After that, TAG Heuer took what I believe was a step backwards in regard to both design and quality, while kicking up the price and also including an automatic version. For 2014 TAG Heuer seems to have begun to figure out how to get the Formula 1's groove back, but these pieces are all mechanical.
You won't hear me complain often that a watch is mechanical, and in theory I appreciate these automatic watches. I do however feel that TAG Heuer had a great thing going with an more accessibly-priced entry level range that focused on quartz offerings at a price of under $1,000. If you wanted to get into something more high-end and mechanical you had the Link, Aquaracer, Monaco, and of course, Carrera families to do so. While the Formula 1 collection is still technically entry-level for the brand, and there are quartz versions available, I think the consumer is left wit a lot of confusing choices. Perhaps I am simply being nostalgic that I want the Formula 1 range to be available to the widest possible demographic and be a fantastic daily sport watch for everyone. TAG Heuer has experimented with the Formula 1 collection making it more mainstream, more masculine, and more "racing." Each of those steps has had its share of good ideas, but I don't think that Formula 1 right now is as attractive an offering as, say, a Carrera or a Monaco.The new for 2014 TAG Heuer Formula 1 Automatic watches come with two movement options. There is the three-hand Formula 1 Calibre 6 Automatic, as well as the Formula 1 Calibre 16 Automatic Chronograph. The three-hand Calibre 6 comes in a smaller 41mm wide case while the Calibre 16 Chronograph comes in a slightly larger 44mm wide case. As of writing, only the three-hand Formula 1 Calibre 6 Automatic model has been released, as the older generation Formula 1 Calibre 16 Chronograph watch is still available. Available in either brushed or PVD black coated steel, the new Formula 1 watches take a new step in design compared the outgoing generation's models. The case is now tonneau-shaped and the dial looks very little like the last few generation Formula 1 models. TAG Heuer's historic Autavia models had similar case shapes, and I suppose one could suggest that TAG Heuer designed the new Formula 1 in its honor.On the wrist, the new for 2014 TAG Heuer Formula 1 Calibre 6 Automatic watch is very attractive with a refined sporty design and legible dial. TAG Heuer should be commended for its design restraint, and focus on legibility. The last few generation Formula 1 models never quite had hand/hour marker combinations that visually pleased me. While these new ref. WAZ2112.FT8023 and ref. WAZ2110.BA0875 Calibre 6 models are not what I would imagine a new Formula 1 to look like, they are pretty nice evolutionary steps that take a new direction.
The three-hand Calibre 6 is a base Swiss Sellita, I believe, and offers a rare layout for sporty race watches with a subsidiary seconds dial. Hands are all the right size and visually these are very sharp. The cases have sapphire crystal and, as they have been for a long time, are water resistant to 200 meters. Of course, I am a fan of the rotating diver's style bezel, which here is a matching color to the case. That latter design element is a bit odd to me even though TAG Heuer introduced it on the last generation of Formula 1 watches. The original Formula 1, as well as a few past generation models have always had distinctive black rotating bezels which in my opinion are very much part of the Formula 1 design DNA. That element is now gone for 2014, but perhaps it will make a return in the future.In addition to the TAG Heuer Formula 1 Calibre 6 Automatic three-hand models is the Formula 1 Calibre 16 Chronograph models. In my opinion, this is where TAG Heuer brings in internal competition between models as they already have a lot of chronograph offerings (like, a lot). I don't mind a quartz chronograph in a Formula 1, but I am not sure how I feel about a mechanical one. Again, in the abstract, I don't mind it, but in the context of the TAG Heuer lineup it feels like an odd decision. The TAG Heuer Formula 1 Calibre 16 Chronograph will also come in either a brushed steel (CAZ2010) or black-coated case (CAZ2011). Note that all the models in brushed steel will come on a bracelet while the black models will come on a strap. A bit larger to make room for the movement and subdials, this is also a nice collection but I can't help but feel that if you are going for a classic TAG Heuer chronograph you should get a Carrera. The Calibre 16 movement is a base Swiss Sellita SW500, I believe.(via TAG Heuer Formula 1 Automatic & Chronograph Watches For 2014 Hands-On | aBlogtoWatch)

Andy Murray defeated ATP No. 2 Roger Federer in Australian Open 2013 Grand Slam semi-finals and will fight for the title against Novak Djokovic. Relying mainly on a solid serve, crossed left hand and deep strokes he managed to be superior to Federer and force him to a lot of defensive play. Murray will meet Djokovic who played one of his best matches beating Ferrer two days ago. 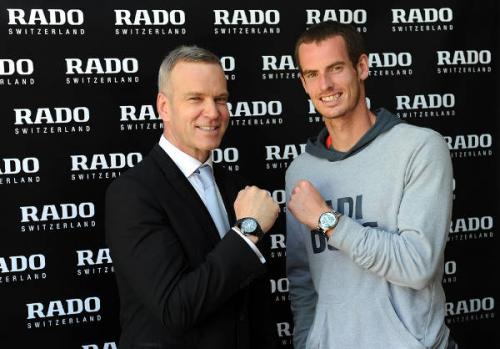 On July 2012 watchmakers Rado named Murray as a brand ambassador in a deal worth a seven-figure sum. As part of the deal he had to wear it when lifting his 2012 US Open trophy, but he couldn't find it. Fortunately his girlfriend Kim Sears found it and the show could go on.
We hope he keeps an eye on the watch while he plays agains Djokovic this time!