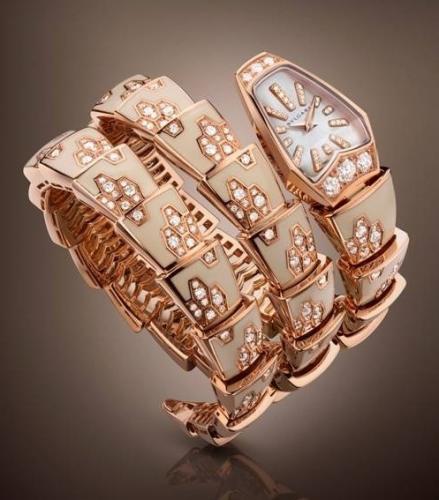 At the Baselworld 2012, Bulgari will be presenting the new Serpenti watches that will perpetuate the Bulgari legend with unrivalled intensity.
Over the years, Bulgari has been able to create a number of subtle and delicate variations in the crafting of the Serpenti bracelet, combining a precious metal structure with precious stones and enamelling, while naturally preserving the innate suppleness and flexibility of this jewellery masterpiece.
In this 2012, the Serpenti collection is a direct heir to the historical legacy of the Brand. Inspired by the Bulgari heritage collection and reinterpreted in an eminently contemporary manner, this sophisticated and charismatic new jewellery creation coils around the wrist with precious, flowing ease.
Forming a natural extension of the bracelet, the case shaped like a snake's head houses a Swiss quartz movement specifically personalised for Bulgari, and is set on either side with 6 brilliant-cut diamonds (0.6 cts) framing the black sapphire or white mother-of-pearl dial (depending on the version) graced with 12 diamond-set hour-markers. 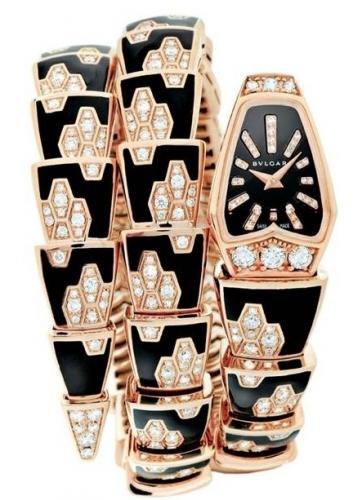 A retrograde small seconds for the Villeret collection 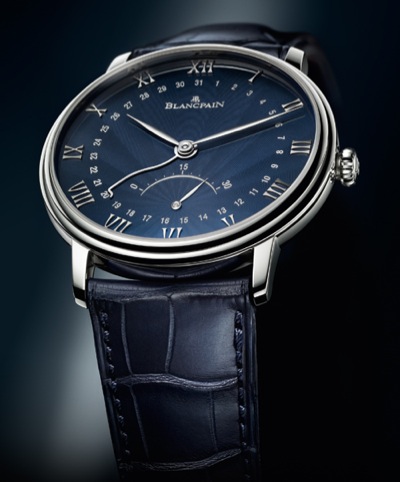 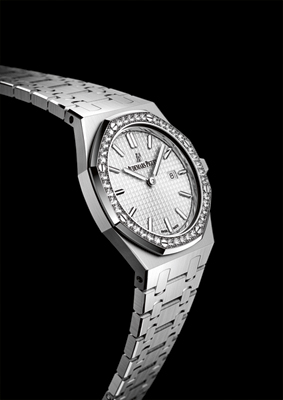 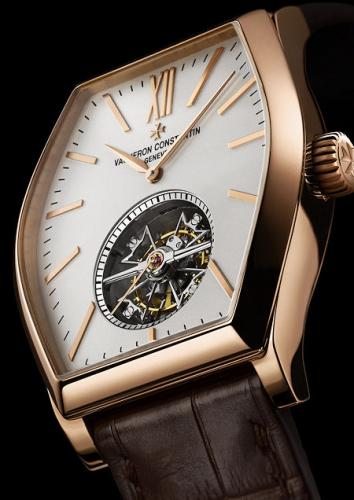 Celebrating the 100th anniversary of the creation of the first Malte models, Vacheron Constantin has presented at the SIHH 2012 four new models to the collection with an updated shaped redesign.
Vacheron Constantin launched the first tonneau or barrel-shaped cases in 1912. From the earliest days, the shape became associated with high style, and with the finest horological complications. In modern times, the Malte collection made its debut in 2000. At SIHH 2012, Vacheron Constantin introduced four newly redesigned Malte models, three of which are powered by movements that have earned the new Geneva Hallmark.
The new four designs are the Malte Tourbillon, the largest piece in the collections; the Malte Small Seconds, presented in a slightly smaller case as the Tourbillon; the Malte 100th Anniversary Edition, a limited editions piece with “exploding” Roman numerals; and the Malte Small Model, a fine timepiece in 18K pink gold with a diamond-set bezel.
The Malte 100th Anniversary Edition is scheduled to be launched in September; the Malte Tourbillon and the Malte Small Seconds are scheduled to be launched in November; and the launched date for the Malte Small Model is yet to be determined.
CHECK OUT! 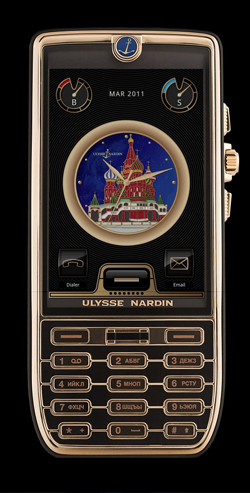 Scientific Cellular Innovations, Ltd. (SCI) announces the first deliveries of the highly anticipated Ulysse Nardin Chairman, a luxury hybrid smart phone, to the United States as well as international locations.
SCI created a docking station that resembles the famed “Ulysse Nardin Ship Chronometers,” a lacquered wooden docking station is made up of over 260 hand-assembled parts that is as functional as it is stylish. A unique, one-of-a-kind creation, the multifunctional docking station charges the battery, backs-up all data to an exterior USB and includes a pair of premium speakers which can be driven by most Bluetooth devices.
The Chairman can now be purchased throughout India at authorized Ulysse Nardin dealers and will ship to additional locations worldwide during the first quarter of 2012, including the Czech Republic, Israel, Russia, Spain, the Caribbean, Azerbaijan, Moldova, Bulgaria and Romania.
In the United States, the Chairman is available exclusively through the Ulysse Nardin Boutiques in Boca Raton, FL and Aventura, FL, as well as East Coast Jewelry, the nation’s top-selling purveyor of Ulysse Nardin timepieces with multiple locations in Southern Florida.