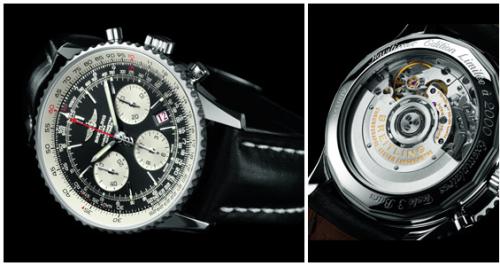 Breitling combines its two long-established passions - chronographs and aeronautics - by offering the legendary Navitimer model in a limited series equipped with its proprietary Caliber 01. Issued in 2,000-piece steel and 200-piece red gold editions, the "Navitimer Caliber 01" is distinguished by its slightly broader diameter and its transparent caseback providing clear views of its high-performance "motor". An eagerly anticipated model among devotees of the brand with the winged B, and a genuine collector's item for all connoisseurs of fine mechanical chronographs and aviation.

In 2009, Breitling laid a major milestone in its history by joining the exclusive circle of the rare watch companies to have their own mechanical chronograph movement. This was a logical culminating point for a brand that is one of the leaders in this complication and has played a crucial role in its technical development through several key inventions: the first independent pushpiece (1915); separation of the stop/start and reset functions (1923); creation of the second independent pushpiece for zero-resetting (1934); and the launch of the very first selfwinding chronograph (1969). Caliber 01, the first movement entirely developed and produced in the Breitling workshops, was first used to power an exclusive new version of the leading Chronomat model, duly named Chronomat 01. Breitling now introduces it within another watchmaking icon, the famous Navitimer which proudly embodies the brand’s aeronautical vocation.

Breitling Caliber 01: a high-performance movement assembled in a revolutionary manner Featuring an original architecture, the selfwinding Caliber 01 chronograph movement is the crowning achievement of the longstanding quest for precision and reliability that has consistently governed Breitling “Instruments for professionals”. Equipped with a column wheel, a vertical coupling clutch and an over 70-hour power reserve, it was designed to ensure maximum functionality and secure use. It features several innovative characteristics aimed at facilitating its production and its operation, including a patented self-centering device for the resetting hammers and an exclusive index-assembly system enabling swift personalized adjustment of the watch according to the wearer. This exceptional caliber is also distinguished by its pioneering production and assembly mode. Inspired by an avant-garde concept used in other cutting-edge sectors, Breitling has developed an industrial chain-production formula that revolutionizes traditional movement assembly.

Each caliber is individually monitored by an ultra-sophisticated computer program that automatically directs it towards the appropriate workstation, along a route alternating fully automated workstations with others requiring manual intervention. All the adjustment phases are integrated within this process, in such a way that upon emerging from the chain, each Caliber 01 is ready to face up to the stringent tests conducted by the Swiss Official Chronometer Testing Institute (COSC) – a guarantee of authentic large-scale production reliability.

Navitimer: the cult watch of pilots and aviation enthusiasts

By immediately choosing to specialize in chronographs and timers, Léon Breitling, who founded the company in 1884, soon gained favor among aviation pioneers who needed sturdy, high-performance instruments. During the 1930s, the brand launched its first onboard chronographs, which were to equip World War II fighter planes, before accompanying the boom in air transport in the cockpits of the finest propeller planes, and later jets. In 1952, the "official supplier to world aviation” created a “wrist instrument” specially designed for pilots and other aeronautical professionals. Equipped with a circular slide rule, the Navitimer chronograph serves to handle all calculations linked to airborne navigation: average speed, distance covered, fuel consumption, rate of climb or descent, conversions from miles to kilometers or nautical miles, etc. Chosen as the official watch by the AOPA Aircraft Owners and Pilots Association), the world’s largest association of its kind, the Navitimer has asserted itself as the most iconic Breitling model – and a cult object for all aviation enthusiasts. In its “Cosmonaute” version with a 24-hour graduation, it accompanied Scott Carpenter on his orbital flight aboard the Aurora 7 capsule (1962), thus becoming the first spacegoing wrist chronograph. Continuously made since 1952, the Navitimer is the world’s oldest mechanical chronograph still in production. By now adopting an “in-house” caliber, it is writing a new chapter in a rich history of major achievements and thrilling moments.

The Navitimer Caliber 01 special edition is available in two limited series of 2,000 in steel, and 200 in red gold, each bearing an individual number engraved on the side of the case middle. The case features a diameter slightly broader than that of the series-produced Navitimer (43 mm compared with 42 mm). The dial which is made using the “épargne” process on a solid silver or gold base – a sophisticated technique endowing the indications with peerless radiance and readability – is exclusively available in a classic black version with applied hour-markers. Breitling’s winged symbol in gold is slightly raised to stand out from the watch face. The transparent sapphire caseback, a rare feature on Breitling models, provides a unique opportunity to admire the original architecture of Caliber 01 with its column wheel, its oscillating weight and its entirely performance-oriented design. An impressive set of characteristics that are bound to delight devotees of exclusive models – before the series-produced Navitimer models equipped with 100% Breitling calibers take flight next spring.