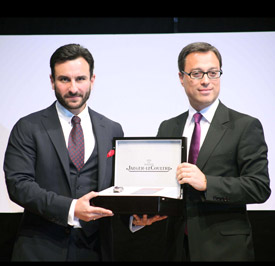 As part of the continuous support to the arts and the film industry in particular, Jaeger-LeCoultre presented the inaugural Glory to the Actor Award at the Abu Dhabi Film Festival, after recently having signed a three year partnership to sponsor the event.

The Abu Dhabi Film Festival (ADFF) is one of the largest and most influential international film festivals in the Middle East. Presented each October by the Abu Dhabi Authority for Culture and Heritage (ADACH) under the patronage of H.E. Sheikh Sultan Bin Tahnoon Al Nahyan, Chairman of Abu Dhabi Authority for Culture and Heritage, the event is committed to curating exceptional programs to engage and educate the local community, inspire filmmakers and nurture the growth of the regional film industry.

On the fifth edition of the ADFF that runs from 13th October to 22nd October, Jaeger-LeCoultre presented actor Saif Ali Khan, in recognition of his achievements as an actor/producer and his efforts in the developments of the Bollywood film industry, with the Glory to the Actor Award. Watch aficionado Saif - son of acclaimed Bollywood actress, Sharmila Tagore, and late India cricket captain, Mansoor Ali Khan Pataudi - wears an ode to his family, a personalised edition of Jaeger-LeCoultre’s Reverso Grand Taille with the Pataudi family crest engraved on the reverse of the case.

Initially an award dedicated to filmmakers at the Venice Film Festival, Jaeger-LeCoultre takes great pride in extending the Glory Award category at the Abu Dhabi Film Festival in 2011 and its feature on the calendar of prestigious film festivals around the world. The Glory Award category honours and supports the film industry in recognition of both upcoming and confirmed actors, directors and producers.
CHECK OUT!
Jaeger LeCoultre's Watches at Interwatches!