In celebration of the 80th Anniversary of the Reverso 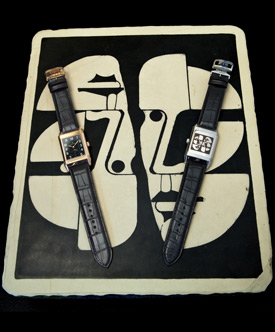 The celebrations and special editions for the 80th anniversary of the legendary Reverso watch continues, and Jaeger-LeCoultre is now calling to renowned artists to create exceptional personalized editions of the Reverso.

Jaeger-LeCoultre is celebrating the Reverso watch in all its glory and on top of featuring special timepieces that can be customised by buyers with the caseback of their choice, it will now also create a unique Special Edition linked to conceptual art that pays homage to the renowned Mexican painter, muralist, and engraver Guillermo Ceniceros.

Guillermos Ceniceros is an internationally renowned Mexican artist whose works is permanently in museum as well as private collections. His aesthetic language is recognized as a concept that is his own original language. Now in association with Jaeger-LeCoultre, the Grande Reverso 976 Guillermo Ceniceros Special Edition takes place.

The work of art engraved on the case-back of this special edition expresses two different elements: man’s duality from a modernistic perspective in the stainless steel edition, and man in motion in the rose gold edition. With two Limited Series, the first model of the Grande Reverso 976 Guillermo Ceniceros Special Edition will feature a stainless steel case with lacquered engraving on the back and will be limited to 50 pieces. The second edition will be produced in pink gold, featuring a fully engraved case-back, and will be limited to 10 pieces.
CHECK OUT!Jaeger LeCoultre's Watches at Interwatches!
Other Related Post:
Jaeger-LeCoultre to support Reverso ambassador Eduardo Novillo AstradaJaeger-LeCoultre at the Abu Dhabi Film FestivalJaeger-LeCoultre Boutique opening in St. PetersburgJaeger-LeCoultre stepping firmly in the city of loveJaeger-LeCoultre supporting Hong Kong’s charitable organizationJaeger-LeCoultre “Reverso 1931-2011, A Legend in Movement”Jaeger-LeCoultre published its Yearbook Five
Diane Kruger Jaeger-LeCoultre’s New Face Al Pacino and Jaeger-LeCoultre Glory to the Filmmaker AwardSaif and Kareena attend 80th anniversary of Reverso in ParisPersonalising your Jaeger LeCoultre Reverso onlineJaeger-LeCoultre Reverso: celebrating a Legend in Paris"Tinker, Tailor, Soldier, Spy" PremiereAvenuel Boutique Grand Opening EventShanghai International Film Festival PartnershipAston Martin Racing: Opening racing session at Sebring, US

A brand new Boutique in the Polanco district 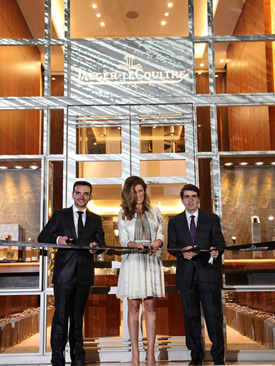 It seems there’s no recession affecting the world of watches as top brands continue to open new boutiques around the world. Last week, Jaeger-LeCoultre hosted a dazzling party to officially inaugurate the Brand’s new Boutique, located in the exclusive and fashionable Polanco district of Mexico City.

As part of the spectacular opening ceremony, Jaeger-LeCoultre created a special 3D animated movie projected on the façade of the Boutique. The striking show transported the guests to the snowy confines of the Vallée de Joux, home of the Manufacture Jaeger-LeCoultre since its inception. The journey began at the origins of the Manufacture with its founder Antoine LeCoultre, before travelling through the iconic creations of the brand.

And the continuous dazzling of the guests did not end there, as this journey into time and history ended when internationally acclaimed artists and Ambassadors such as Diane Kruger and Clive Owen, who have long been sported Jaeger-LeCoultre creations on their wrists, popped up on the facade of the Boutique.

A tribute to the duality of the Reverso 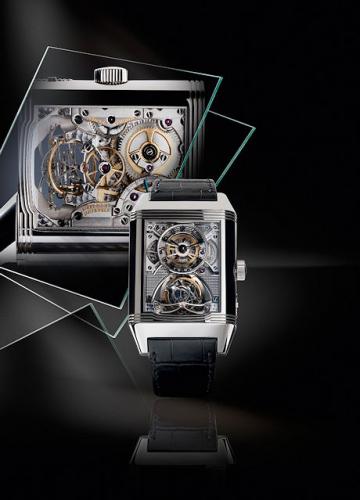 On the year the legendary Reverso is celebrating its 80th anniversary, Jaeger-LeCoultre is dedicating its 2011 Yearbook to this timepiece, unveiling rare models and telling the history of this emblematic watch.

The Yearbook Five, it’s the fifth edition by Manufacture Jaeger-LeCoultre of a large-format, richly-illustrated book that draws inspiration from the latest activities of the prestigious watchmakers from the Vallée de Joux in order to provide access to broader cultural and artistic horizons.

In celebration of the 80th anniversary of the legendary reversible timepiece, this magnificent publication unveils some of the rarest, most emblematic models to be created since 1931. It magnifies these beautiful mechanisms and tells the history of Reverso models engraved with the royal emblems of kings and princes.

For this fifth edition of the yearbook, Jaeger-LeCoultre is publishing pictures taken by Astrid Muñoz, a famous photographer and top model who has travelled around the world and captured the essence of the countries she visited and their people with their customs and folklore.
CHECK OUT!Jaeger LeCoultre's Watches at Interwatches!Other Related Post:Diane Kruger Jaeger-LeCoultre’s New Face Al Pacino and Jaeger-LeCoultre Glory to the Filmmaker AwardSaif and Kareena attend 80th anniversary of Reverso in ParisPersonalising your Jaeger LeCoultre Reverso onlineJaeger-LeCoultre Reverso: celebrating a Legend in Paris"Tinker, Tailor, Soldier, Spy" PremiereAvenuel Boutique Grand Opening EventShanghai International Film Festival PartnershipAston Martin Racing: Opening racing session at Sebring, US 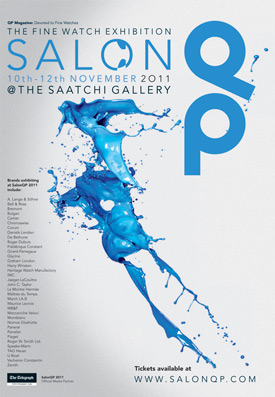 Last week, from November 10th to November 12th, La Vallee de Joux arrived to the UK, and for the first time Jaeger-LeCoultre presented the Reverso 1931-2011, A Legend in Movement as an exclusive exhibition for the event.

Presented a whole dedicated exhibition for the first time at the Saatchi Gallery, Jaeger-LeCoultre, a synonymous of tradition and innovation, in a unique experience for the sophisticated watch collectors or connoisseurs of fine art and watches. The Master Class hosted by the most experienced Jaeger-LeCoultre watchmakers, offering VIP and watch specialists to delve into the know how of fine watchmaking.

At the Reverso 1931-2011, A Legend in Movement, three exceptional timepieces take centre stage and pays to the iconic Reverso watch which celebrated its 80th Anniversary: the Reverso Repetition Minute a Rideau, the Grande Reverso Email, and the Reverso Grande Compliaction a Triptyque.

As part of the exhibition, attendants were able to learn how to assemble and dissemble the Reverso Grande Calibre 875, one of Jaeger-LeCoultre most famous movements. From the smallest pinion to the largest barrel, attendants were able to assemble the main spring, right down to the escapement or ‘heart’ of the watch which regulates the energy to the balance.
CHECK OUT!Jaeger LeCoultre's Watches at Interwatches!Other Related Post:Diane Kruger Jaeger-LeCoultre’s New Face Al Pacino and Jaeger-LeCoultre Glory to the Filmmaker AwardSaif and Kareena attend 80th anniversary of Reverso in ParisPersonalising your Jaeger LeCoultre Reverso onlineJaeger-LeCoultre Reverso: celebrating a Legend in Paris"Tinker, Tailor, Soldier, Spy" PremiereAvenuel Boutique Grand Opening EventShanghai International Film Festival PartnershipAston Martin Racing: Opening racing session at Sebring, US

Jaeger-LeCoultre’s CEO, Jerome Lambert stated that Jaeger-LeCoultre is proud to present the unique Proto Zero to all watch-lovers in Hong Kong, and particularly to be supporting the charitable cause of “End Child Sexual Abuse Foundation” with these one-of-a-kind creations.

The list of prototypes currently available in 1881 Heritage Boutique in Hong Kong includes the Master Grande Tradition a Petetition Minutes, produced in a limited edition of 100. Also available at the boutique are the Master Grande Tradition a Tourbillion 43, equipped by the legendary automatic Jaeger-LeCoultre Calibre 978; and the Reverso Gyrotoubillion 2, representing a splendid approach to the quest for absolute precision.