At the opening of the 11th International Film Festival of Marrakech, event that will run from December 2nd to December 10th, American actress Jessica Chastain was spotted wearing the Joaillerie 101 Etrier.

Jessica Chastain played in the 2011 films The Help, The Debt, Take Shelter, and The Tree of Life and will take on the role of Princess Diana in the upcoming film Caught in Flight. During the 11th International Film Festival of Marrakech, the actress is also member of the jury chaired this year by director Emir Kusturica.

Paying tribute to the excellence of Jaeger Le-Coultre timepieces, Jessica Chastain stroll the red carpet of Marrakech with a Joaillerie 101 Etrier, a diamond-set watch with the smallest mechanical movement in the world.  On a previous occasion, at the 68th Venice International Film Festival, Jessica chose to wear the Grande Reverso Lady Ultra Thin. 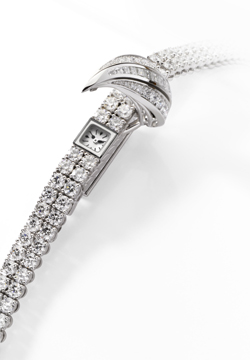