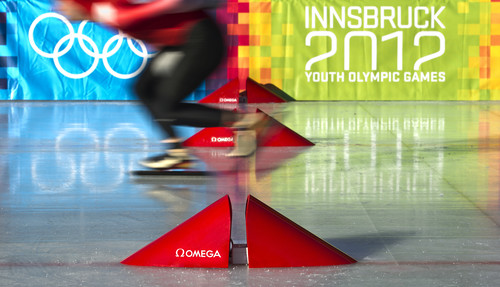 Last week Omega officiated as the official timekeeper and sponsor of the first Winter Youth Olympic Games at the opening ceremony of the games taking place in Innsbruck.
As with the Olympic Games, each of the 63 events in all 15 disciplines will be timed by Omega. Since 1932, Omega has been Official Timekeeper 24 times; the brand is particularly proud to be bringing its unparalleled sports timekeeping legacy to Innsbruck for the first edition of the Winter Youth Olympic Games.
Omega’s presence at the Games will be impressive: 69 on-site professionals supported by 74 trained volunteers, 21 tones of equipment including 6 public scoreboards as well as 10 sport-specific scoreboards, 12 km of cables and optical fiber and state-of-the-art timekeeping and data-handling technology developed by Omega and adapted to the requirements of each sport.
On its third visit to Innsbruck, Omega, who is serving as Official Timekeeper and Data Handler at the Winter Youth Olympic Games, was also on hand when the Olympic Winter Games were staged in Innsbruck in 1964 and 1976.
CHECK OUT Omega Watches at Interwatches!