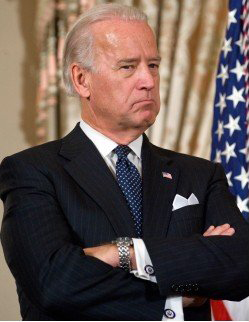 Joseph Robinette "Joe" Biden, Jr. was born in November 20, 1942. Joseph Biden is the 47th and current Vice President of the United States. He was first a United States Senator from Delaware, until his resignation on January 2009, when he was elected to the Vice Presidency. Biden became an attorney in 1969 and was elected to a county council in 1970. Biden was first elected to the Senate in 1972 and became the sixth-youngest senator in U.S. history. He was re-elected to the Senate six times and was the fourth most senior senator at the time of his resignation. 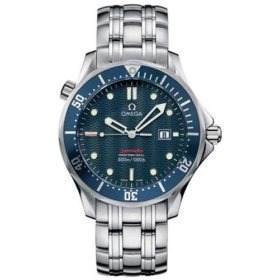 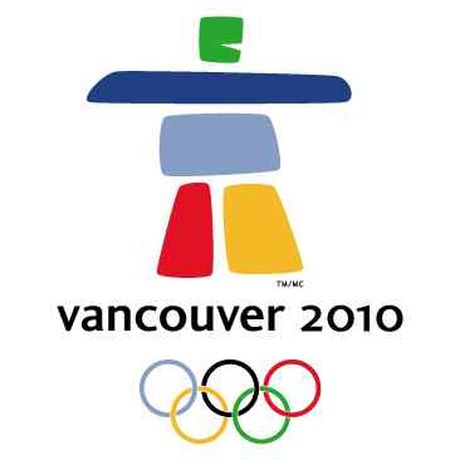 The giant OMEGA Countdown Clock approaches the fantastic Opening Ceremony of the Olympic Games today in Vancouver. OMEGAâ€™s professionals are actively involved in preparations for the competition where, for the 24th time, the Swiss specialists will serve as Official Timekeepers at the Olympic Games and also -on the 12th of March- at the Paralympic Games.

At OMEGAâ€™s first timekeeping assignment for the Olympic Winter Games in Garmisch-Partenkirchen, Germany in 1936, a lone OMEGA technician brought 27 stopwatches which were used to time each event at the Games.
Seventy years later in Turin, the watchmaking company deployed 208 professionals â€“ 127 timekeepers and 81 data handlers â€“ armed with 220 tons of equipment. 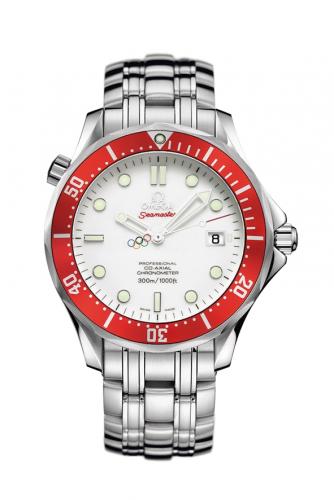 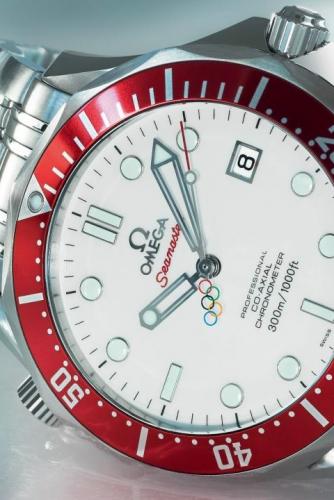 The Vancouver 2010 Olympic Winter Games will attract an estimated three billion television viewers worldwide. More than 10,000 members of the press are planning to attend and it is projected that the vancouver2010.com website will be visited 75 million times.

This year, for the Vancouver Olympic Games, Omega has launched a brand new limited Seamaster edition of 2,010 timepieces in order to commemorate the sport event and will also make the colorful attraction of the Canadianâ€™s Vancouver 2010 Olympic Games. 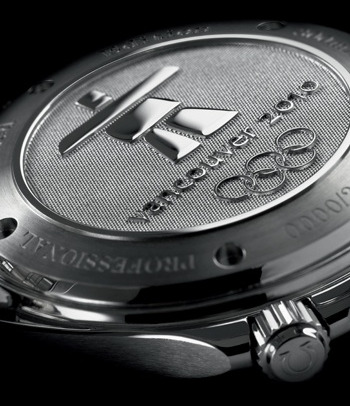 Â Â Â Â Â  The metallic red bezel pays a tribute to the Canadian flag, and the Olympic Colored Rings attached as counterweight to the seconds hand. As for the specifications, the Omega Seamaster 2010 is powered by a 2500 movement that employs the reliable and high-performance Omega Co-Axial escapement, it is 300 m water-proof. It is also equipped with a helium valve, a screw-down winding crown, and features the robust and stylish â€œBondâ€ Seasmaster stainless steel bracelet. The case has the Vancouver 2010 Winter Olympic Games logo engraved on its back, the unique series number, and the Ilanaak symbol of the Olympic Games.

CHECK OUT!
Omega watches at Interwatches! 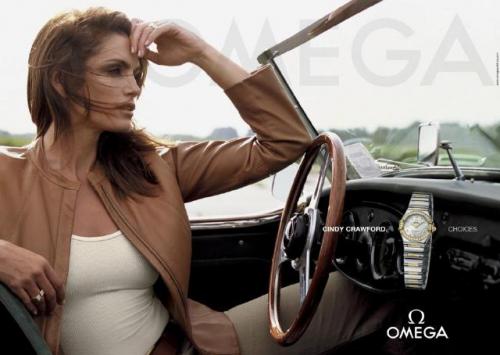 Madoff auction welcomes bids on wristwatches like: Cindy Crawford was born on February 20, 1966. She is a former model from United States. Known for her trademark mole just above her lip, Crawford has adorned hundreds of magazine covers throughout her career. She was named #3 on VH1's 40 Hottest Hotties of the 90s. Her success at modeling made her a celebrity that has led to roles in television and film, and to work as a spokesperson. 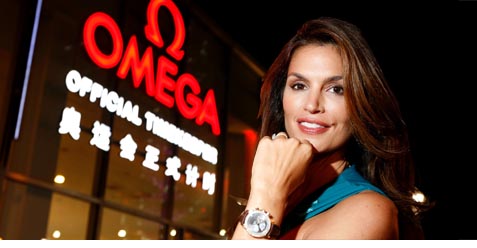 As an OMEGA ambassador since 1995, Cindy Crawford has been promoting OMEGA products longer than any of the companyâ€™s other ambassadors. She was chosen to join the â€œOMEGA familyâ€ for her fashion flair and because her style fits the brand perfectly. She shares many of OMEGAâ€™s values, including quality, reliability and a strong sense of tradition. Cindy Crawford participates not only in advertising campaigns but is also actively involved in events and in product design â€“ giving her personal input and helping to give the finishing touches. Her inspiration and opinions are of great value to OMEGA. 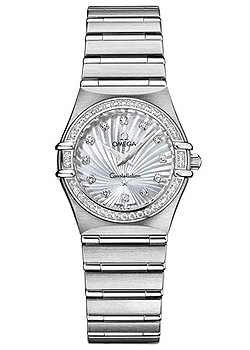 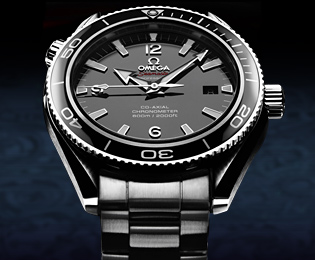 
An innovation in bezel materials from luxury watchmaker Omega: one new timepiece from the spectacular Seamaster Planet Ocean collection. The Omega Seamaster Planet Ocean Liquidmetal Limited Edition watch features the fundamental specifications of other Planet Ocean 600m watches. Case diameter is 42mm, and the stainless steel bracelet incorporates the Omega dual-pushbutton folding clasp with a concealed dive extension that allows for wear atop a wetsuit. Applied Superluminova hour indexes and arrow-tipped hour hands contribute to outstanding legibility under conditions of poor or nonexistent lighting. The thick sapphire crystal features a gentle convex profile, and offers excellent legibility, thanks in part to an anti-reflective coating applied to both sides. The caseback, winding crown, and helium release valve all screw down securely, and contribute to the impressive water resistance rating of 600 meters (2000 feet).
Ticking beneath the screwed steel caseback decorated with the famous Omega Seahorse logo is the Co-Axial 2500 caliber. Based upon a highly elaborated ETA 2892 base, this movement offers a power reserve of approximately 42 hours. The balance pulsates at the distinctive pace of 25,200 beats per hour, a technical necessity implemented to assure reliable operation within the framework of the innovative Omega Co-Axial Escapement. Bridges and the central winding rotor display Cotes de Geneve patterns, while the mainplate is decorated with circular graining. The caliber features both a stop seconds function for precise setting and convenient, rapidly-adjustable calendar. A confirmation of the caliber's precision comes from the Controle Officiel Suisse des Chronometres (COSC), which has subjected each caliber to a highly specific range of tests over a period of 15 days.
Omega has plans to produce 1,948 examples of the Seamaster Planet Ocean Liquidmetal Limited Edition watch. As astute fans of horological history will readily note, that number pays tribute to the year in which the first Omega Seamaster timepiece was introduced.

Its conexion to the Swimming, Polo and Athletics World.

Omega was the first company to be entrusted with the official timekeeping of all disciplines at the Los Angeles Games in 1932 using chronographs and stop-watches developed by its subsidiary LÃ©mania. Omega's association with the Olympic Games led to well over half a century of pioneering developments in the field of sports timekeeping.


Omega and the Swimming World 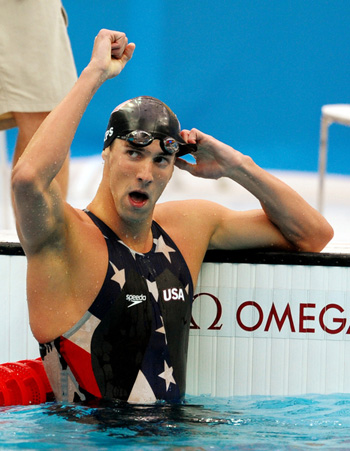 
The association between Omega and swimming dates back to 1932 when the brand was first entrusted with the official timekeeping of all disciplines at the Olympic Games including swimming.

The watchmaker symbolized by the Greek letter for perfection has had a decades-long partnership with the swimming world. In addition to its role as official FINA partner, it is also the Official Timekeeper of LEN (European Aquatics) and has served in many internationally renowned swimming competitions, among them the Pan Pacific Championships and, of course, the Olympic Games. This relationship has led to a long list of innovations in the field including the world's first semi-automatic swimming timer, the Swim Eight-O-Matic Timer, first used at the Olympic Games in Melbourne in 1956, and the famous "touch pads" placed at each end of the pool for timekeeping at swimming events, first used at the Pan-American games in Winnipeg in 1967. 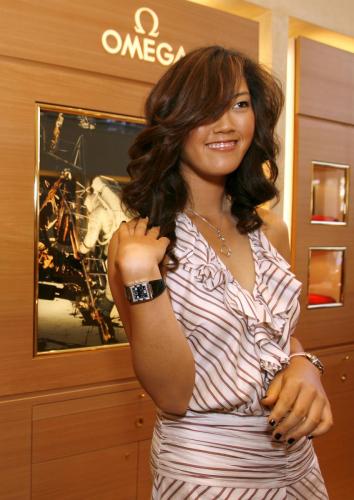 Omega is one of the few watch brands in the world with a history and tradition in golf. Founded in 1848, 12 years before the first-ever British Open took place at Prestwick golf course near Glasgow, Omegaâ€™s involvement in international golf today includes tour and tournament sponsorship as well as official timekeeping.

In 2007 Omega became the title sponsor of the World Cup of Golf. Founded in 1953, the World Cup is the oldest and most prestigious global golf team event, which invites two-man teams from 28 leading golfing nations to compete for the title. Under Omegaâ€™s sponsorship, the World Cup will be played at Mission Hills in China, the worldâ€™s largest golf complex, until at least 2018.

In order to commemorate its connection to the world of golf, Omega introduced a unique model to its popular and distinctive Constellation watch line. The OMEGA Constellation Double Eagle blends technical innovation with design excellence in a wristwatch which is at once elegant and sporty. 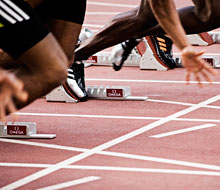 OMEGA has always been committed to athletics timing and continuously develops its timing technology. Thanks to OMEGAtiming, Lausanne's Athletissima meet on July 6, 1994 marked a milestone in sports history: at exactly 8:20pm, Omega timed the 1/100 second which made the American Leroy Burrell the new king of the 100 metres, in just 9.85 seconds! Precision to 1/100 second - how crucial timekeeping had become!

The brand is particularly proud to be associated with the Golden League Meetings in Berlin, Brussels, Monaco, Oslo, Paris, Rome and Zurich - where Omega is the official timekeeper.