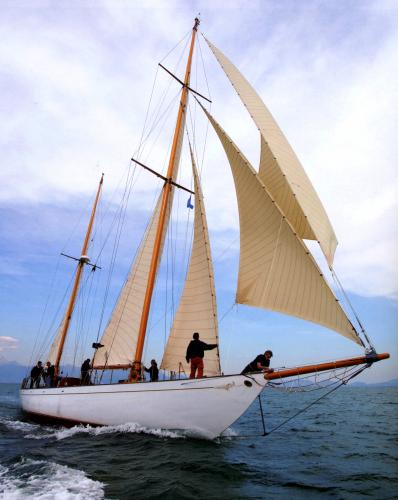 Since 1936, when Officine Panerai designed the first prototype of an underwater watch for Group One Missions (Italian Royal Army), it has maintained a remarkably strong relation with the sea and with the navigation world that has taken Officine Panerai not only to the great development of magnificent instruments for the sea, but also to sponsorship prestigious competitions such as the Panerai Classic Yachts Challenge, the most important international circuit.

It was then in 2006 when the company acquired a sailing boat that was tied up to the Caribbean island Antigua. It was transferred to Italyso that it could be restored. Two years and a half later, in Dic 2009, the Sezione Velica de la Marina Italiana de la Spezia celebrated the rebirth of EILEAN, 22 m long, winning (Panerai) in 2010 the “Premio Italia 2010 per la vela” to the best restoration of a vintage sailing boat.