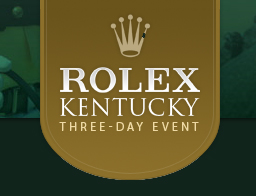 THE ONLY FOUR STAR THREE-DAY EVENT IN THE AMERICAS

Because horse and rider combinations compete in World Championships and Olympic Games at the Four Star level, the ability to train and test themselves at this level on an annual basis is critical to developing strong individuals and teams for those contests.
While not every combination that competes at the Four Star level will be chosen to represent the U.S. or, in the case of foreign riders, their own country, the Rolex Four Star Championship, $200,000 in prize money and a Rolex Watch make the competition important in its own right. Additionally for U.S. riders, the USET Foundation CCI**** Championship for the Pinnacle Cup marks the high point of any U.S. rider's career.
To win Rolex Kentucky sets a horse and rider apart and they become members of that upper echelon who are winners of a CCI****. Simply to finish also puts them in select company.


ONE OF THREE EVENTS IN THE ROLEX GRAND SLAM OF EVENTING

The Rolex Grand Slam of Eventing awards $250,000 to the Rider who can win the Rolex Kentucky Three-Day Event, the Mitsubishi Motors Badminton Horse Trials in England the first weekend in May and the Burghley Land Rover Horse Trials in England the first of September in succession. In its 5th year in 2003, Pippa Funnell of Great Britain became the first Grand Slam winner with wins at Kentucky on Primmore's Pride, Badminton on Supreme Rock, and Burghley on Primmore's Pride, taking the $250,000 prize that most had thought impossible to win. When the next Grand Slam winner will burst onto the Eventing scene is anyone's guess.