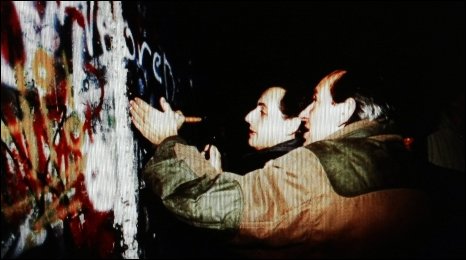 The Berlin Wall was breached after the East German government moves to lift restrictions on travel across the border to West Germany in November 9th, 1989.

Communist East Germany erected the 155-km (96-mile) concrete wall in august 3rd,1961 in order to encircle West Berlin and prevent citizens from fleeing into the capitalist enclave. More than 100 people are believed to have been killed at the Wall while trying to escape.

French President Nicolas Sarkozy posted on Facebook a picture of himself at the Berlin Wall on the fall's 20th annuversary.

The image shows Mr Sarkozy, then a 34-year-old French MP, standing before a graffiti-covered section of the wall back in 9 November 1989. Mr Sarkozy will today join world leaders in Berlin to mark the 20th anniversary of the fall of the Wall.
Nicolas SarkÃ¶zy de Nagy-Bocsa was born on 28 January 1955. He is the 23rd President of the French Republic. He assumed the office on 16 May 2007 after defeating Socialist Party candidate SÃ©golÃ¨ne Royal 10 days earlier. 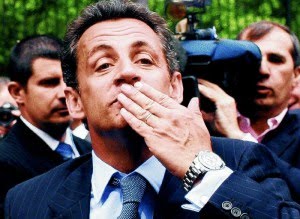 Nicolas Sarkozy is a true Rolex collector, with a particular appreciation for the Rolex Cosmograph Daytona, which was made famous by the late American acting icon Paul Newman. He has been pictured many times wearing the classic white faced Daytona, but he seems to prefer the rarer black faced Daytona. The Rolex Cosmograph Daytona is easily recognized for its stainless steel case and an oysterlock bracelet. Rolex Cosmograph features an intricately fashioned dial, whether white or black, and a synthetic sapphire case. It is also water resistant to 100 meters. [Full article]