Extremely well known as "the father of the chronograph", George Graham (1673-1751) has also been the man who had great ideas and invented the first wall chronograph or mercury pendulum.

Commissioned by the Greenwich Royal Observatory to create the master watch used by the astronomers, Graham became the first and great watchmaker of eighteenth century named by the Royal society. To continue with this spirit of extraordinary innovations and technical ability, Graham is nowadays a contemporary firm of watches dedicated to those who are enthusiastic about mechanic arts. 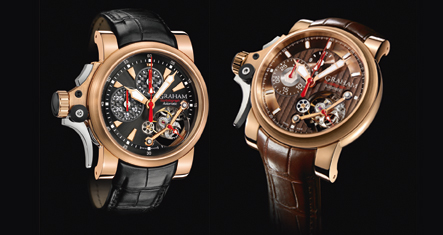 Four years ago, Graham decided to make a timepiece in order to pay tribute to the genius of its namesake, famous British watchmaker George Graham. To achieve this goal, the brand joined with well-known movement manufacturer La Joux-Perret (with whom it partnered on the development of Graham's chronograph foudroyante).
The result of years of making their best innovations, we are able to enjoy the result: the Automatic Chronofighter Trigger Tourbil-lograph, a combination of tourbillon and chronograph with a unique â€˜British eccentricâ€™ off-centre tourbillon. 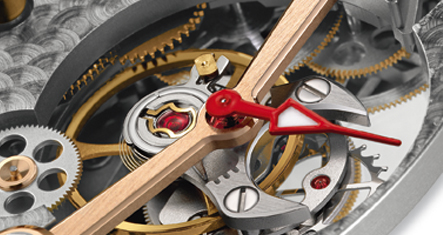 The movement powering this timepiece is the Graham Caliber G1780, a tourbillon with column-wheel chronograph, known as â€˜roue Ã€ colonneâ€™ in French. Available in a 46mm 18 carat 5N red gold case, the new Tourbillograph features a domed sapphire crystal on the front and a flat see-through back. The frequency of its movement is 28,800, while the spiral, balance, escapement wheels and anchor are reinforced with an Incabloc anti-shock system. The Tourbillograph's tourbillon cage weighs just 0.485 grams and is made of 48 pieces.