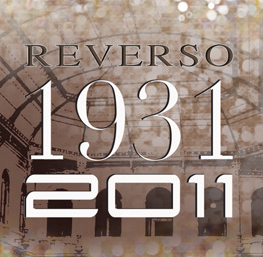 It is in this symbolic structure, with its blend of timeless and contemporary artistic creativity, that Jaeger-LeCoultre chose to celebrate the 80th anniversary of its cult watch, the ‘iconic’ Reverso.

A fitting symbol for this watchmaking legend, whose story began on 4th March 1931, in Paris… It was on precisely that date that the patent for the invention of a watch capable of sliding on its base and flipping over on itself was officially filed. A unique and ingenious invention: the Reverso was born!

The Reverso has enjoyed 80 wonderful years of stories, anecdotes, aesthetic variations and technical innovations, which have served only to beautify the watchmaking world's premier cult watch — an achievement celebrated in fitting style on 28th June 2011. The retro-chic venue was the perfect setting for this latest unveiling of the 80 year-old watch’s rich heritage to 800 Brand guests, including such prestigious dignitaries as Ambassador Diane Kruger, Clive Owen, Catherine Deneuve, and also Adrien Brody, Inès de la Fressange, Julien Doré.

This unique celebration highlighted not only the iconic watch's origins and success and the stories of the celebrities who have worn it… but also its myriad identities, as crafted by the exceptional engravers, enamellers and gem setters at the Manufacture, whose talent for personalising the timepiece knows no bounds. Such personalisation is now available to all Reverso owners thanks to the on-line personalisation service!

Reverso, the celebration of a legend in Paris: view the videos with highlights of the celebration, as well as the glamour of the red carpet through the photo reports!