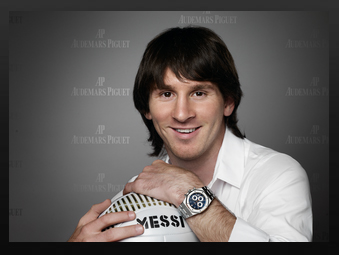 Audemars Piguet ambassador Leo Messi expressed the full force of his formidable talent in the Champions League final on Saturday May 28th 2011. The UEFA quite logically named him Man of the Match, given the spectacular display provided by the Argentinean champion who shone like a supernova among the 22 stars that sparkled on London’s Wembley pitch.

Despite a steady run of successes, Leo Messi admitted after the Champions League final against Manchester United (3-1) to being truly impressed by what his FC Barcelona team has achieved, exclaiming that: “this is a match that will be long remembered! This team is doing some extraordinary things and we haven’t yet fully grasped what we have accomplished. We want to continue winning titles”.

Having scored the second goal for FC Barcelona and set up the third, the man who has notched up 53 goals for his club during this season in various competitions definitely gave a performance worthy of the event – exactly as one would expect from a sports icon. He tortured the Manchester United defence with his technical mastery and breathtaking moves. In scoring his 12th Champions League goal for the 2010/2011 season, he equalled the record held since 2003 by Ruud Van Nistelroy.

At just 23 years old, the two-time Golden Ball winner continues to earn titles and individual distinctions with disarming ease and shows no signs of resting on his laurels. He is now aiming for victory with Argentina’s national team in the Copa America which is being held in his homeland.