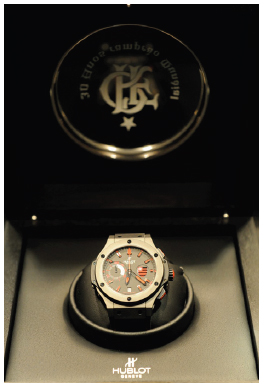 40 million supporters. One of the most legendary football clubs in the world. Ranked by FIFA as one of the greatest clubs of the 20th century… it’s the Clube de Regatas do Flamengo ! And for the first time in its epic history, a watch will be dedicated to it to commemorate the club’s victory in the Club World Cup which celebrates its 30th anniversary this year. A limited edition series of 250 pieces in the club colours, red and black, with its legendary emblem featured on the dial at 3 o’clock, and a special
case back commemorating 30 years of victory.

CHECK OUT Hublot Watches at Interwatches!