Andy Murray and Rafael Nadal presented with a Longines Admiral 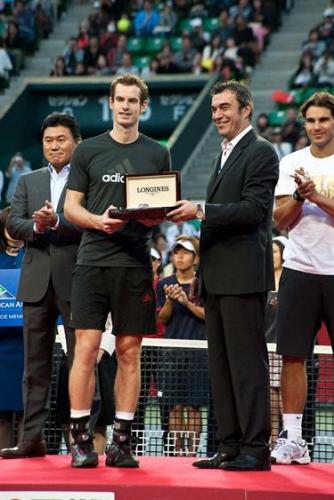 The 2011 Rakuten Japan Open Tennis Championship was held in Tokyo from October 3rd to October 9th with Longines acting as official timekeeper for the third consecutive year. At the oldest ATP World Tournament in Asia, which took place in the Ariake Coliseum in Tokyo, the two finalists of the men’s single, Andy Murray and Rafael Nadal,  were presented with a Longines Admiral.

This Championship is one of the major events in the Asia sports calendar and a must event for all tennis fans, and this year Andy Murray set himself an advantage over Rafael Nadal, winning the championship on October 9th. The President and Representative Director of Swatch Group Japan presented the two finalists with two Longines, a brand that has collected funds at the Longines Smash Corner to support Tohoku area, as part of its commitment to the world of tennis.

In a relationship with the world of sports that started in 1978, Longines has enjoyed a privileged relationship with tennis, and it was appointed official timekeeper and partner of the Roland-Garros International Tennis Championship in Paris, Kremlin Cup in Moscow, and the Rakuten Japan in Tokyo. It has additionally appointed two Ambassador of Elegance from the tennis world, Andre Agassi and his wife Stefanie Grad, two of the world’s most admired players.